(How) can we do without Russian gas?

The import of Russian gas has already decreased. Now is the time to become independent of Gazprom, argue TU Delft energy specialists. But how?

Europe has obtained about 40% of its natural gas from Russia for decades. Over the last half year this figure has decreased to about 25%, notes Energy Analyst Prof. Kornelis Blok (Faculty of Technology, Policy and Management, TPM) from figures published by Bruegel, the European economic thinktank. A couple of weeks ago, of the 90 terawatt hours of imported natural gas, only 18 came from the Russian Gazprom. This is not 40%, but 20%. How did this come about? 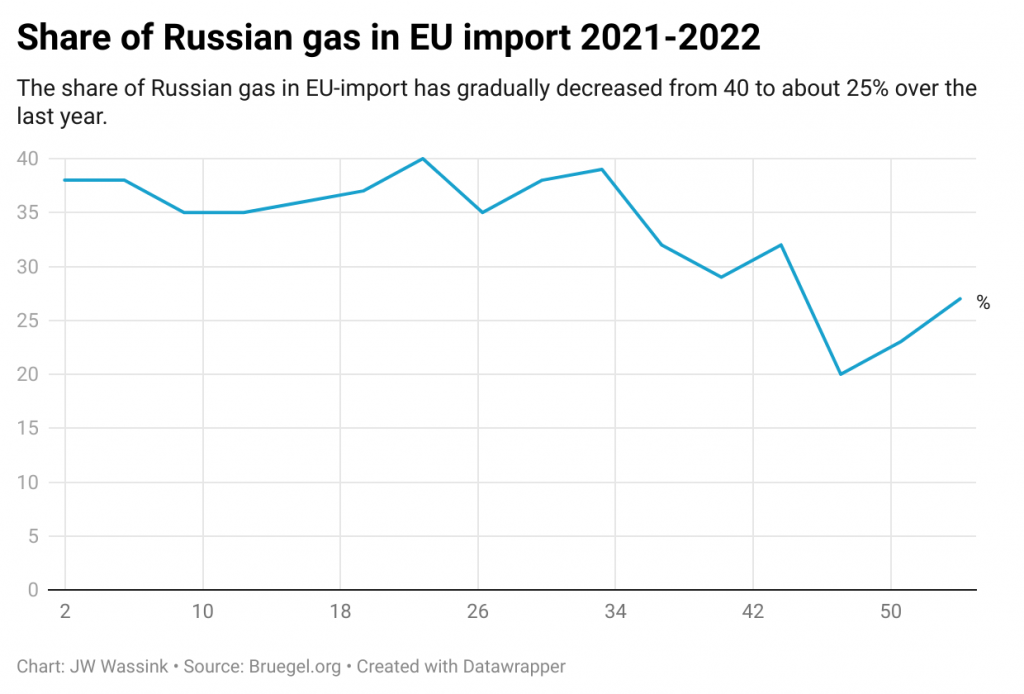 European gas imports from Russia started dropping halfway through last year (week 26 onwards). Gazprom met its contractual obligations, but only delivered the minimum amount of gas stipulated. Imported gas from Norway was jacked up to the maximum, and about a month later the LNG (liquid natural gas) imports rose in an attempt to make up the difference. “The prices rose from EUR 80 to EUR 100 per megawatt hour on the European market,” says Blok. “Gas tankers en route to the Far East changed course in the middle of the ocean and headed to Europe because they could get more money for their cargo.”

The reduced import has had serious effects on our gas stock, notes Energy Economist and member of the De Mijnraad (an advisory body to the Minister of Economic Affairs and Climate Policy, Eds.), Dr Aad Correljé (also of TPM). He says that “This has necessitated us to draw on our stocks. We have also been lucky this winter. It was a mild winter, so households did not need to use as much heating.”  He believes that the real litmus test will only come next winter.

Difficult decisions
Can Europe cope with no gas from Russia? Thinktank Bruegel recently wrote the following: ‘if the EU is forced or willing to bear the cost, it should be possible to replace Russian gas already for next winter without economic activity being devastated, people freezing, or electricity supply being disrupted. But on the ground ... hard decisions [will have to be] taken.’

The potential for greater imports is limited, says Blok. Terminals are already operating at full capacity. That said, LNG terminals are being planned in dozens of places in Europe and existing harbours are being expanded. So in the short term no extra LNG can be expected, but in the long term it can be.

Thermostat down a couple of degrees
How can we reduce our energy consumption and avoid serious problems in the short term? Blok believes that if consumers turn down the termostat by just one degree, coupled with other small measures, they will already save about 10% of their consumption. “Similar things could also be done in other sectors such as offices, schools and hospitals. If we see the chance to reduce our consumption by 10%, this would be a substantial contribution to reducing the energy dependence on Russia.”

Energy intensive companies, including the fertiliser and aluminium producers in Europe, have already stopped using the gas, notes Correljé. “That these companies are currently not using gas is not a long-term solution. Europe cannot do without fertiliser, and certainly not if you think that less or no foodstuffs – especially grains – will come here from Ukraine and Russia in the near future.  We will then need even more fertiliser than before. We also see that relatively more electricity has been generated from coal than from gas recently. Producing electricity like this is far less sustainable so you want to stop doing it as quickly as possible.”

‘This is not a good time to close nuclear power stations’

To his mind, a more structural solution is the faster installation of solar panels. “This is one of the few energy technologies that has a very short turnaround time.” In contrast, expanding other forms of low CO2 energy, such as wind or nuclear energy, take years.

Correljé too agrees with the need to move sustainable energy sources up a gear. “Let’s hope that the current energy crisis acts as a strong stimulus to get sustainability moving at a rapid pace.”

Political push
The most immediate response is to save energy. To achieve this, Blok advocates for management at national level. He would like to see Prime Minister Rutte use the current momentum to become independent of Russian gas.

“We should be able to save 10% of our gas consumption quickly, but it is not easy to get everyone to cooperate. There is a lot of willingness now though, so Rutte should rally the troops and say – as he did when the coronavirus struck – ‘this is really needed, we must do this’.”

The Chair of the European Commission Ursula von der Leyen expressed the European perspective on Wednesday. “The European Union has enough LNG, liquid natural gas, to get through this winter without being dependent on gas imports from Russia.” She too encouraged residents of the EU to cut down on their energy consumption so as to hasten independence from Russia.

This week, under pressure from the Ukraine crisis, the Commission presented the REPowerEU plan to end all imports of Russian gas well before 2030. One way to do this is to speed up the transition to sustainable energy.

‘You should not leave this to the market’

Untapped sources of gas
We may get through this winter, but what about the next cold season? Correljé emphasises that the energy reserves must meet demand before then. He believes that the gas stocks are the Government’s responsibility. “The current situation shows that you should not leave this to the market.”

To bump up the gas reserves, Europe needs to extract more gas itself, he asserts. “There are still many untapped sources of gas in the North Sea and in northern Germany as extraction was not viable with low gas prices. Gas should now be extracted as quickly as possible. And we should keep the Groningen gas field as a reserve. We should not seal that gas field now.”