How to behave? Input wanted

Sabine Roeser: "We are all responsible for the culture here at TU Delft." (Photo: Connie van Uffelen)

TU Delft has drawn up a Code of Conduct. Before the draft is finalised, students and staff are asked to share their feedback.

The Code of Conduct is the successor to the 2012 Code of Ethics. It took a working group chaired by TPM professor Sabine Roeser about six months to write it, as announced in the 2018 Vision on Integrity.
In that time, representatives from staff and student bodies have had the chance to give their input. Now the working group is inviting all staff members and students to provide their feedback.

Cooperative attitude
Support staff, for instance, are required to actively engage with their institutional processes and to keep the lines of communication open in order to ‘stay current with the changes being made in legal, regulatory and institutional requirements and expectations for academic, social and organisational integrity’.

Students are required to show ‘intellectual curiosity, active participation in courses and extracurricular activities, and an optimal effort to obtain good results’ in their studies. According to the Code of Conduct, they are ‘responsible for [their] own education’, should show respect for their work partners ‘via an active and cooperative attitude’, and are expected to ‘critically engage with the material [they] study, with [their] instructors and with each other’.

Social safety
Academics are asked to be to ‘meticulous and thorough in [their] feedback and grading’ and to ‘treat the work of students with respect’. They should also be ‘conscientious about who is given authorship’, avoid potential conflicts of interest, and ‘use the TU Delft integrity infrastructure to safeguard human and animal research participants’. 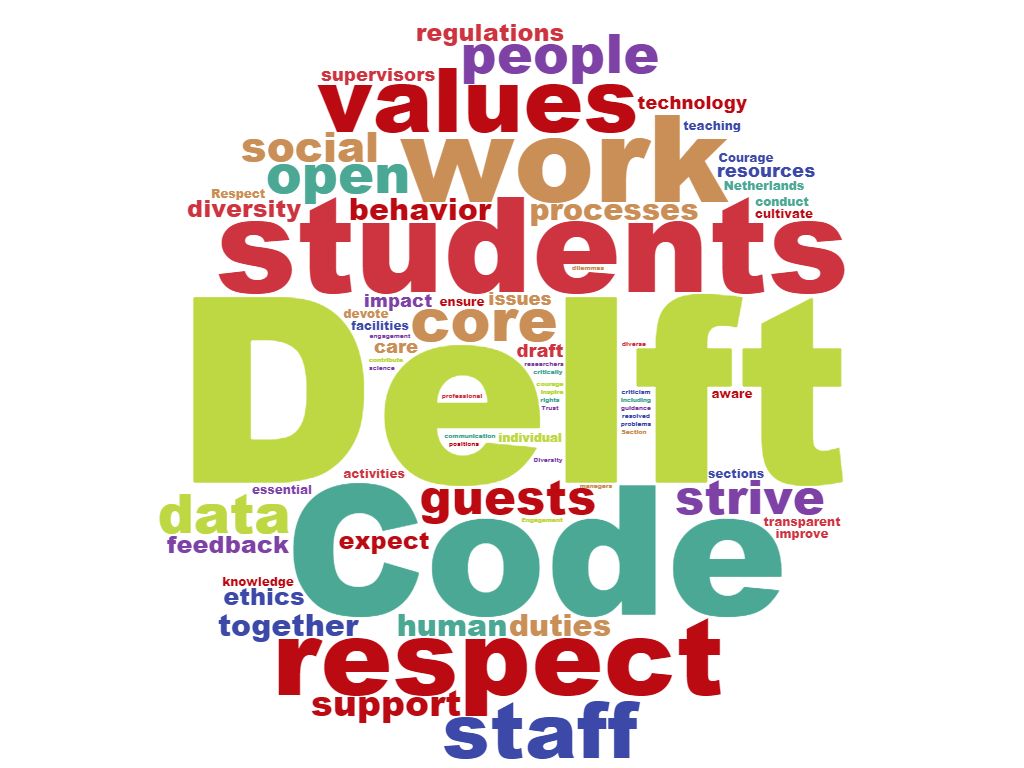 Another way the Code of Conduct differs from the 2012 Code of Ethics is the explicit attention paid to social safety, the three ‘pillars of integrity’ being academic, organisational and social integrity.
The Code says, for instance, “Respect must be paramount in all communications, expressed by the style and tone of our e-mails, in formal meetings and in informal conversations.” Open communication and mutual trust should help resolve misunderstandings, for many disagreements are based on miscommunications, according to the Code. ‘Checking what the other person meant in a friendly way, without accusing them of wrongdoing’ could help, as can ‘reflecting on our own behaviour’ and ‘putting yourself in the shoes of another’.

Sceptical
The ‘core values’ from the Strategic Framework 2018-2024 and the ‘Integrity Statement’ from the 2018 Vision on Integrity have become part of the Code of Conduct. The core values of TU Delft, described by the acronym DIRECT, are: diversity, integrity, respect, engagement, courage and trust. The Integrity Statement consists of twelve guidelines that students, staff and guests should live by, the first being: “All members of the TU Delft community treat each other with respect, irrespective of their culture, religion, ethnicity, socio-economic background, gender or sexual orientation.”

Professor Sabine Roeser, chair of the working group, is looking forward to feedback on the code. Students and employees have until September 20 to respond. “In my experience from discussions on integrity, there is always room for new insights, so we very much welcome input from the broader TU Delft community.” The working group plans to finalise the code in October. After that, it will be presented and discussed during a special integrity event.

Roeser realises that some people will be sceptical about making rules on how to behave. “Others say, as do we, that nothing will change without them. Without some form of guidance, it will be difficult to raise awareness.”

Intellectual humility
What happens when people do not behave according to the guidelines and statements depends on the situation, Roeser adds. A different working group is designing a policy for that. In the meantime, Roeser stresses the importance of what she calls intellectual humility.
“It is possible that you do not know everything about a situation, so when you have a criticism to make, start by asking a friendly and business-like question. Censorship is never the right thing, nor is silencing others. But self-censorship might be a good choice sometimes, again out of intellectual humility and empathy with the recipient of one’s feedback. Thus, we should think about what we say and do. However, when there is a real wrongdoing, decisive action is needed, in consultation with relevant colleagues and managers. We are all responsible for the culture here at TU Delft, people in leadership positions even more so than others.”

You can read the draft TU Delft Code of Conduct online at integrity.tudelft.nl. Feedback can be given by e-mail: integrity@tudelft.nl

Universities in the north of Italy are now closed due to the outbreak of the coronavirus. The same could happen here should the virus spread to the Netherlands.
Campus