How are TU Delft teachers teaching their own children?

Primary schools are being closed for longer and this is a major hassle. TU Delft teachers too are at their wits end because of home schooling.

Thursday is now TU Delft teacher Johan Bijleveld’s (Faculty of Aerospace Engineering) most productive working day. This is the day that his wife, a medical doctor who works four days a week at a hospital, is free and teaches the children. And that means that he can work on campus. “It’s so quiet here, isn’t it?” His big grin is revealed on Microsoft Teams. Bijleveld has one daughter and two sons: Quinn (eight years old, class five); Ferre (five years old, class two); and Thibo (two years old). It’s a very busy household. “My children are very able to work and play independently. But as soon as I open my laptop, it’s ‘Dad, what are you doing? What’s happening? Who’s that on your screen?’”

TU Delft teacher Rolf Hut (Faculty of Civil Engineering and Geosciences) gives glimpses of his home teaching situation on Twitter and Instagram. His followers see how Hut builds huge constructions with marshmallows and spaghetti with his son Luuk (eight years old, class five), does calculations and gives himself a headache over reading comprehension.

Both Bijleveld and Hut see that their children benefit enormously from a daily routine. Luuk and Quinn have received daily schedules from their schools since lockdown. This did not happen during the first lockdown, when primary schools had to close temporarily but did not have clear programmes for home schooling. Bijleveld says that “Before Quinn had the daily schedule, I had to get her to start her school work sometime in the morning and when she was finished, we could go outside. Now everything is organised. Her teacher gives the work for that day early in the morning and the times that she has to start on each subject. She is doing a lot better now, and so am I as it gives parents a framework to work with. I now have a better idea if she has done all her work properly.” 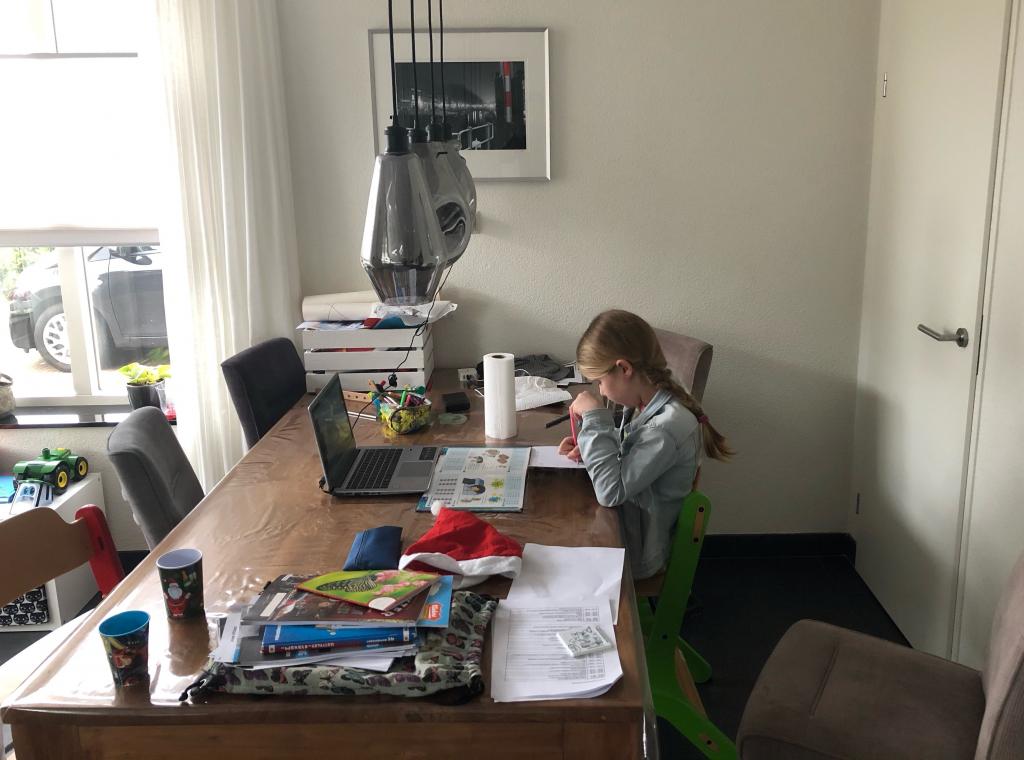 Quinn is learning about ‘plankwoorden’ from the living room. (Photo: Johan Bijleveld)

TU Delft teacher Timon Idema (Faculty of Applied Sciences) too appreciates the daily schedules. He has two children: Aron (seven years old, class five) and Jasper (five years old, class two). “Aron starts the day with a conversation with his class. He then hears what he is to do and works on it.” Idema tries to maintain that structure with Aron and Jasper. Aron especially likes the clarity about what he has to do. I can tell him that I have a telephone meeting until that and that time, and after that we will look at their school work.” Just before the Christmas holidays the school had not yet produced a programme and Idema and his wife had to make up everything as they went along. “It was a lot more difficult. If Aron asks what he has to do and he does not get an answer, he is not happy.”

Pull your agendas out
Rolf Hut and his wife arrange every day who will sit with their son, when. “You cannot expect an eight year old child to work independently all day long. We try to check on him every 15 minutes. Sometimes all it takes is to pop your head around the corner.” They also agree, depending on their own programme for the day, who attends to Luuk if he has questions. “Just as an example, I’m now being interviewed by Delta and later on I have a meeting with a bachelor student. In these cases, Luuk can simply come in if necessary,” he says as he closes the curtains with colourful crocodiles and fish. “I’m working in my son’s old room.” 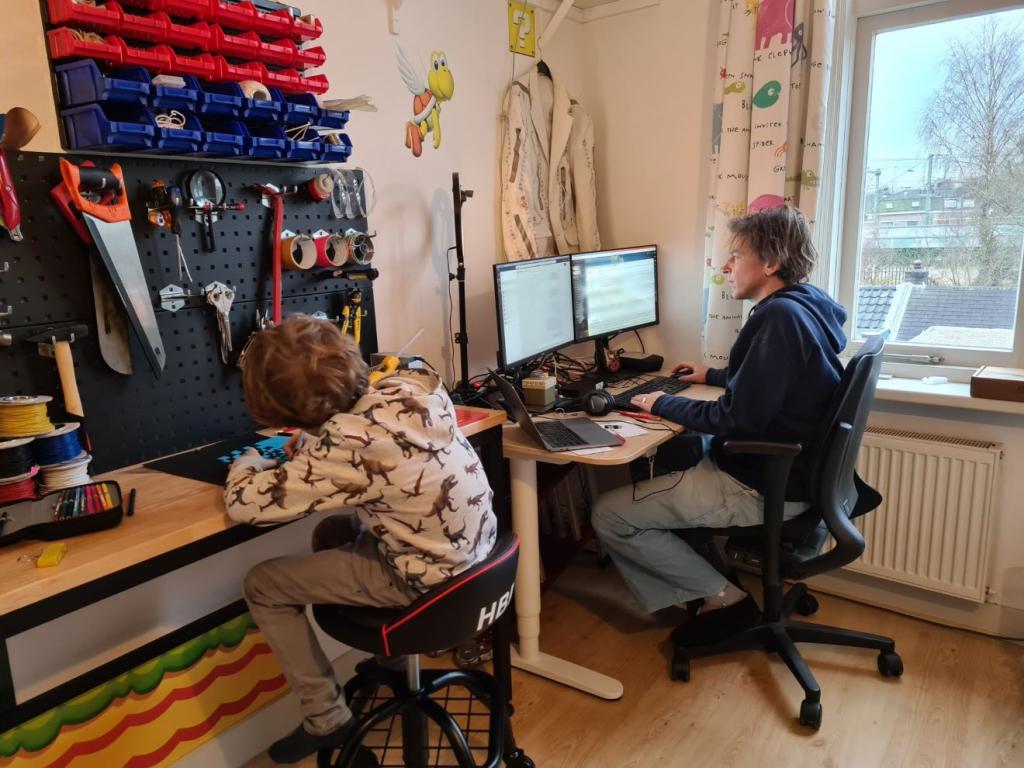 A survey by the FNV trade union (in Dutch) shows that should schools stay closed longer, 83% of the working parents foresee problems or even serious problems in combining work, childcare and home schooling. For Bijleveld in particular it is a juggling act to combine home schooling with work. He is usually the only parent at home. He gets help in every so often so that he can do other things, such as teach his students. “I then ask a babysitter to come for a couple of hours, or I bring my youngest son to the childcare centre.”

All three teachers do the work that they were not able to do during the day, in the evenings and weekends. Idema says that “You need to critically think about what you do and do not do. Teaching my students and certain research projects cannot wait, but I have postponed a few things which I can do later in the year.”

Plankwoorden and reading comprehension
Do their teaching skills as university teachers help in giving home schooling? Not really, they say. And yes, they sometimes tear their hair out. Hut says “I know how to motivate my students, but motivate an eight year old? No idea. I simply don’t know.” 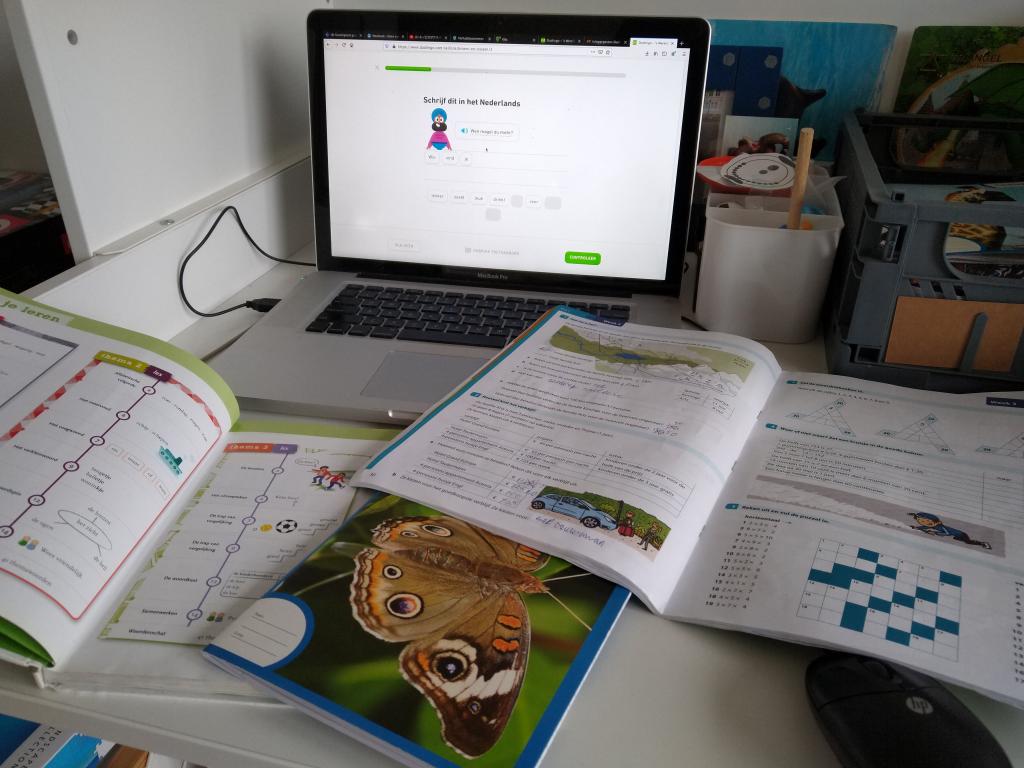 Aron has a desk in his own room (Photo: Timon Idema)

Hut does not shy away from helping his son with calculations or more technical things, but this is different in the language subjects. Reading comprehension is a big stumbling block for him. “This is hell for both Luuk and me. He recently said ‘yes, but my teacher can explain it really well!’ How do you respond?” Another complication is that the subject matter is so different now than when Idema, Hut and Bijleveld were at school. Bijleveld gives an example. “My daughter has to learn a lot more rules in language learning than when I was at school. For example, she has lessons about ‘plankwoorden’ in Dutch which are words that do not have a G between the N and the K. I have no idea why they have to learn language like this.” They also have concerns, among which is the social development of their children. “They learn social skills at school that we cannot teach them,” says Bijleveld. “If one of Quinn’s classmates asks her to explain something, she learns from helping out.” Hut’s son is an only child and so is spending little time with his age peers. “We do make play dates for him, but that is different from sitting in a classroom with 30 children of his age for 20 hours a week and playing together during the breaks.”

Hut, Idema and Bijleveld’s children miss going to school. “Aron misses his classmates and his teacher. If I would ask him to choose between going to school tomorrow or continuing home schooling, I know what he would say.” But one positive thing is that home schooling creates more family time. “Our family has grown much closer,” says Hut.

Delta is taking a break

After a very productive year, Delta is taking a break. Until Monday 16 August we will not be publishing, but we are not leaving you empty-handed!
Campus

Rather a joint than a pill during lockdown

More than 20% of TU students say that they have used more cannabis since the corona crisis started. And they do so more often alone. These are the findings of a Delta survey.
Campus