Queen Máxima in conversation with a board member of LHBT+ youth association Outsite. (Photo: Mind Us)

During a visit to the OWee activities market, Queen Máxima and Minister Dijkgraaf heard about the importance of student associations for students’ welfare.

On Wednesday, hundreds of students wandered along the stands at the activities market at the X sports and cultural centre. More than 60 sports, cultural and social clubs presented themselves to the attendees of the OWee (first year bachelor students) and at the Introduction Programme (first year master students).

Queen Máxima and Minister Robbert Dijkgraaf of Education, Culture and Science did a round too. The Queen did so in her capacity as the Honorary Chair of MIND Us, a foundation established in March to improve the mental health of young people.

She talked to members of the Ariston football club, Outsite the LGBT+ youth association, the Student Onbeperkt platform and the Groover jazz club at the activities market about loneliness and having a social network while studying.

Máxima talked about studying during Covid with Marissa van der Tol, Applied Mathematics student. For Van der Tol, who has fibromyalgia, digital education was a relief. She did not need to go to campus every day anymore and suddenly had enough energy. “But I also know that it is important to see your fellow students once in a while. I hope hybrid education will become the norm.”

After the activities market, several students shared stories with Queen Máxima and Dijkgraaf about the pressure to perform, stress, loneliness and initiatives that they have set up to help improve the well-being of students.

‘Laga is a real no nonsense association: don’t complain, just get on with it’

Lutsia Kors, Board Member of the Laga rowing association, set up a welfare committee in her association last year. “As the Secretary, I saw that students gave up their membership if they had psychological issues.” She saw the reality of the situation and took action. Last year, one of the things the committee did was to organise a ‘smash workshop’ in which participants could release their frustration by smashing televisions and other items.

Queen Máxima asked Kors what her biggest surprise was when she set up the committee.

“Laga is a real no nonsense association. The attitude is don’t complain, just get on with it. I didn’t expect a lot of people to sign up, and would have been happy with just a couple of motivated members. In the end, 25 people signed up.”

Pressure to perform and failing

The subject of mental health must not be a taboo subject, believes Joost Sanders, Chair of the Delft Association Council (VeRa). “We are working with the Chairs of TU Delft student associations in various ways, such as through poster campaigns, to try to make the subject more tangible. During the pandemic we launched the ‘Trek wel aan de bel’ (alert someone) whereby we drew attention to the helplines in and outside TU Delft.”

The posters are also displayed at student associations. “It would be good if students talk about issues such as loneliness and the pressure to perform while having drinks.”

For Pranathi Srikrishna, who is involved in organising the Introduction Programme (IP), the pressure to perform is a hot topic. “International students at TU Delft in particular have unrealistic expectations of themselves. They take more subjects per block than average and are not satisfied with a score of eight. These extreme demands put a burden on their mental well-being. They suffer from the pressure but do not dare talk about it as admitting that it is not going well is seen as failing.”

In a second discussion, which Vice Rector Magnificus Rob Mudde and student doctor Kirsten Flink joined, it was emphasised that making mistakes is an important part of the learning process. “I think we should remove the word from the dictionary,” says Mudde. “Failing is not failure, it is learning,” adds Queen Máxima. She asks those present “How can we bring about a change in culture?” 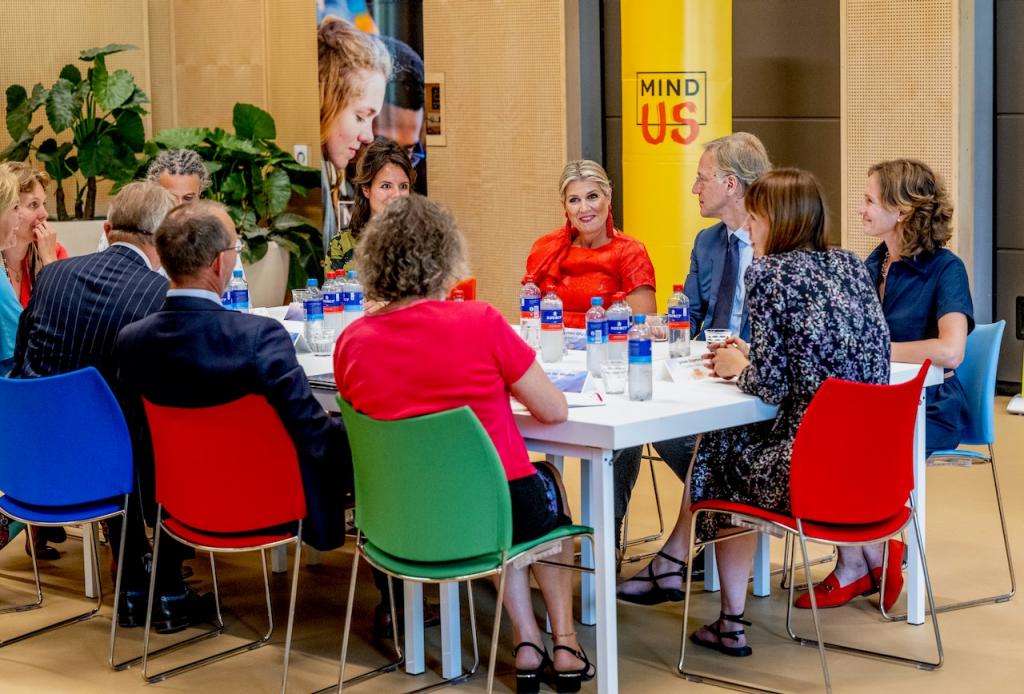 Several TU Delft staff members spoke with Queen Máxima and Minister Dijkgraaf about what they can do to improve the mental health of students. (Photo: Mind Us)

“By easing the pressure from an early age,” says Flink. “Even at a young age children learn that if they do sports they should win and that a higher level of schooling is better. It is small things that create unrealistic expectations which they later, as students, suffer from.”

Minister Dijkgraaf stresses that the mental health of students is a priority subject for the Cabinet. “More attention will be paid to prevention. To make students more resilient and tough and to ensure an inclusive and supportive study climate.” He promises that EUR 15 million will soon be earmarked every year for this purpose.

The COA wants to extend and prolong the shelter for asylum seekers at the TU Delft campus. The Municipality is prepared to look into this and has already approached TU Delft.
Campus