Help, we got scammed!

International students go above and beyond to find housing. Not just to have a roof over their heads, but because they need municipal registration. Without one, a residence permit won’t be granted. Meaning they might have to abort their studies abroad before they even started.

That’s why, even before coming to Delft, these students actively respond to advertisements on Kamernet.nl, Roomster.nl and even in public groups on Facebook. To experience first-hand what international students might encounter when trying to find a room, Delta decided to follow in their footsteps.

We start out by scanning one of the largest Facebook groups for TU Delft internationals. As we are looking for housing advertisements, we accidentally come across a warning message from Arturo (surname known to editor). ‘No matter how urgent your housing request is, do not fall for the classic scammers,’ he writes in a post.

We decide to contact him to find out what happened and to gain a bit more insight how these scammers work. “I posted some ads in different housing groups on Facebook and included my contact information,” Arturo begins. “After a few days a so-called landlord contacted me via WhatsApp. He offered a nice room for a good price. I was kind of suspicious because landlords usually don’t contact you directly, but I didn’t notice right away it was a scam.”

It wasn’t until he was denied a viewing of the room that he sensed trouble. “The landlord wrote me a long text (screenshot on the left) explaining that he was working abroad and wouldn’t be able to show me the room. From that point on, I knew it was a scam.”

Let’s get scammedArturo’s message however isn’t the only one, there are multiple posts from internationals outing scammers. We write down the names of the scammers and decide to use this group to contact three of these known scammers: Matt Tushar, Anselmo Rubio and Oluwasanmi Ajasa. We send out messages via Facebook Messenger and wait in anticipation. Tushar is the first to respond. After just 36 hours he sends us a message with the contact info of one Samuele Ruffini, the apparent landlord (screenshot below). 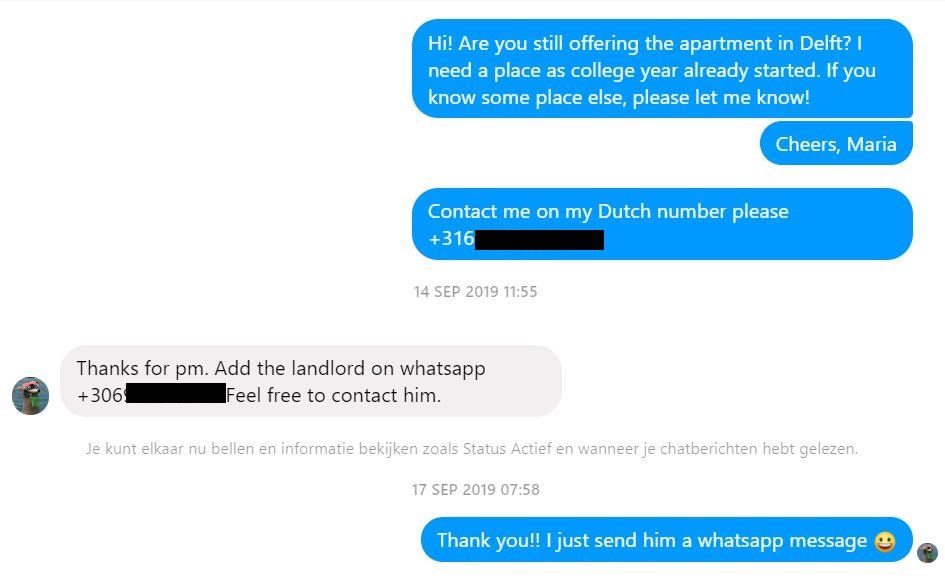 We switch to WhatsApp and add the number that, according to the country code, appears to be registered in Greece. Ruffini tells us he’s renting out the Adriaan Pauwstraat 12 in Delft, a fully furnished apartment with a private bathroom. For just EUR 400 including utilities. With rents skyrocketing, this seems like a golden opportunity. Or is it too good to be true? Because when we Google the address, we end up at the TU Delft Rental Fraud website. What it gives is that the Adriaan Pauwstraat 12 is listed as a reported address for rental frauds.

Viewing
Okay, let’s regroup. How do we find out we are actually part of a scam? We remember Arturo telling us he wasn’t able to get a viewing of the apartment, so let’s start with that. We ask Ruffini for an appointment, he declines. We are not surprised when he texts that he’s abroad for work and won’t be able to travel back and forth to the Netherlands just for a viewing. ‘Why do you even want a viewing if we can just look at the pictures?’, he asks.

By now, we’re convinced Ruffini only has bad intentions. We decide to play this game a little longer, fake interest and ask him about the next step. Ruffini seems thrilled and immediately sends us a contract by WhatsApp. He stresses that we need to fill it in (including our full name and passport number) before he sends over the payment details.

The contract seems, besides some grammar and spelling mistakes, legit. We decide to forward it to an attorney who specialises in rental cases (name known to editor). A quick glance shows that the contract is indeed not put together badly. And that just might lure some desperate students into signing. Because, let’s be honest, if it looks real why bother reading the small print?

Luckily, an attorney bothered and listed a few things that stood out from normal rental agreements in the Netherlands.

ImpatientDuring the time it takes the attorney to check the contract, Ruffini seemingly grows impatient. He puts pressure on us by telling he has other interested tenants, ‘so we must act quickly’. Would a real landlord with real property ever push you into signing a contract? 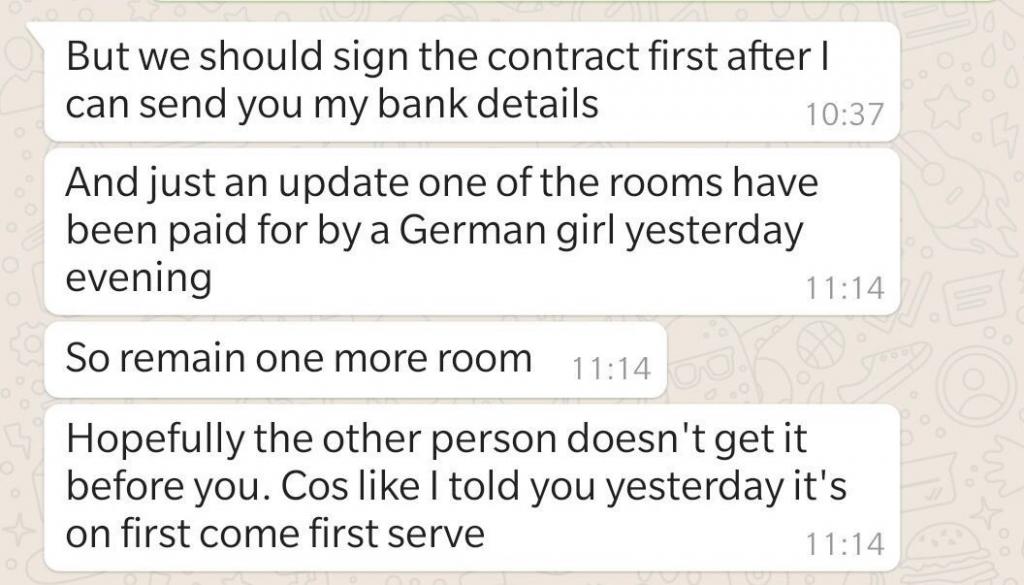 Since Ruffini’s phone number seems to be registered in Greece, we try to get a hold of his banking info. It could also be that he just registered a phone number there, but is actually in a completely different country altogether. He is reluctant to hand us his bank details since we haven’t signed the contract. We push our luck and come up with the lie that we aren’t 18 yet and need the signature of an adult. Ruffini gives in and offers to secure the apartment for us if we pay a deposit of EUR 600.

Upon receiving Ruffini’s banking info, we trace the IBAN back to the Piraeus Bank based in Greece. Scanning the details we notice a new name. The info isn’t connected to Samuele Ruffini or to Matt Tushar, but to Bassoum Assana. When we confront Ruffini, he claims it’s the account of his fiancé. ‘Because my own account has a limit on incoming transfers’, he explains.

GenevaSince Arturo already warned us that scammers will often try to convince you into transferring large sums of money, we decide to fake our transaction. We tell Ruffini that we paid what was asked (EUR 600), but want to withdraw our offer and that we also need a refund of our deposit.

Ruffini obviously didn’t receive any money and asks for a billing receipt. He tells us to just take a screenshot and send it by WhatsApp. Luckily, we know that taking screenshots of bank accounts is blocked by most Dutch banks. We can, however, forward an email with the receipt. But to do this we would need his email. He doesn’t seem to mind and provides us with an address. A quick Google search shows us that the person behind this email account also offers apartments in Geneva and other Dutch cities. Funnily enough, the pictures look really familiar … Wait, that’s exactly the same apartment we’re in the running for!

If Ruffini uses the same pictures for different addresses, we might be able to find out more when doing a reverse image search. And we do! We get one hit, the pictured living room seems to belong to someone named Charles G. Registered since 2012 as a home owner at Tripadvisor, with almost a hundred positive and verified reviews.

Contacting GreeceWe decide to break things off and do some further investigating without Ruffini breathing down our necks. We contact the Piraeus Bank and send them an email explaining the situation and asking whether or not they are familiar with such matters.

As of now, we’re still waiting for a reply. All we got were empty promises from the Piraeus Bank saying that they will look into our questions.

Having lost a little faith in humanity we decide to pay the actual tenants of Adriaan Pauwstraat 12 a visit. After ringing the bell twice a day for over a week, no one answered the door. We even dropped a note in the mailbox, asking them to contact us. We start to doubt ourselves, maybe this wasn’t a scam after all. Luckily a passing neighbour told us that the house is occupied and that she believed the occupants were students. Looking at the empty beer bottles in the window, we are likely to agree.Common rental fraud
At the beginning of our investigation we had already noticed that the apartment at the Adriaan Pauwstraat 12 was listed as a common rental fraud by the TU Delft. According to a TU Delft spokeswoman, this website is regularly updated and checked by the department of Education and Student Affairs (ESA). The last update was this summer.

Since there is no compensation for victims of these frauds, TU Delft hopes to warn as many students as they can on their website. “If a student doubts whether they are dealing with a scammer, ESA will always refer to this website and will warn them to tread carefully.”

Ongoing investigationFor now, our research is done. We’ve got to know a little more about how housing scammers work and how to avoid falling for a scam. However, since we’re still waiting for a reply from the Piraeus Bank and in view of the increase in numbers reported by ESA, this investigation is to be continued at a later date.