Prof. Natasja de Groot is a cardiologist and electrophysiologist at Erasmus MC with an appointment at TU Delft. (Photo: Guus Schoonewille)

During open-heart surgery at Erasmus MC, the entire heart is measured using advanced electrodes from TU Delft. How does that help in looking for cardiac rhythm disorders?

The electrodes in the display cabinet show the technical developments over the last 20 years. The oldest one looks like a kind of small shower head from which four cables emerge, ending in computer mouse-sized plugs. Natasja de Groot used it during her PhD research on heart rhythm disorders in Leiden. The newest electrode is a wafer-thin strip to which three metres of multilayer flat cable are attached to read out the 192 channels simultaneously. The cable was made at TU Delft in the Bioelectronics group of Prof. Wouter Serdijn (Faculty of Electrical Engineering, Mathematics and Computer Science).

A day without dancing is a day not lived, says cardiologist-electrophysiologist Prof. Natasja de Groot (Erasmus MC). In a previous life, she trained as a classical ballet dancer at the ballet academy in Amsterdam. But when injuries thwarted her dream career after 10 years, she decided to go to the athenaeum (pre-university education, Eds.). In her biology lessons, she was so taken with the workings of the heart that she decided to study medicine and not, as she had previously thought, astronomy. As a child, she wanted to be a dancer by day and an astronaut by night. And then she became a cardiologist.

During her medical studies, De Groot's sense of patterns and rhythms led to an interest in heart rhythm disorders - a widespread but poorly understood disorder. A heart can beat too fast - up to 300 beats per minute - too slow, or even skip a beat. “It usually starts with atrial fibrillation, lasting a few seconds to a few minutes. Then most people go to the doctor with complaints,” says De Groot.

It can happen to anyone, and the risk increases with age. But unfortunately, ‘ablation’ treatment (damaging the heart tissue to stop unwanted conduction) is only moderately effective. In addition, there are poorly understood methods (such as ear stimulation) that demonstrably reduce cardiac dysrhythmia, but whose mechanism is unknown. In short, there is still much uncertainty about how exactly the pulse of life travels over and through the heart. That is why De Groot has set herself the task of ‘quantifying the electrical properties of the heart’ as that's where everything starts.

Staying curious
She has been doing this since the end of last year as Medical Delta Professor with appointments at both Erasmus MC and TU Delft. She runs a research team with doctors, engineers, a biologist, a veterinarian, a clinical technologist and even an astronomer. “A nice group of professional idiots,” she tenderly calls her team. “Everyone has their own passion, but they all enjoy watching someone else‘s as well. They love science and they remain curious.” She describes a cycle in which better measuring instruments lead to better measurements, better analyses and better questions that in turn require better instruments. “That’s how we keep each other busy.” 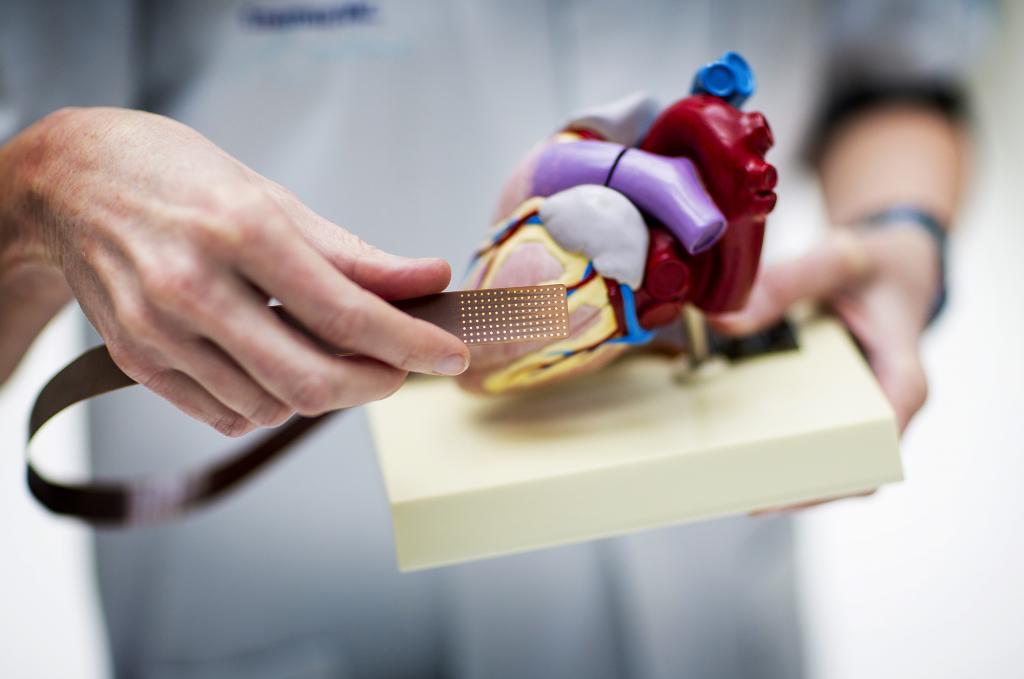 The electrode with 192 contact points and the multilayer flat cable on a full-size model heart. (Photo: Guus Schoonewille)

The measuring campaign started in 2010. At the time, during open-heart surgery she got cardiac surgeons to hold a special electrode against the heart at eight defined positions for five seconds to record the electrical signals. The latest version of the electrode has 192 contact points, two millimetres apart. This means more than 1,500 different ECGs per patient. In the meantime, more than 1,000 patients have been measured in this way, forming a very diverse group. Some have congenital heart failure or arrhythmia, others do not. At best, you could say that everyone had a heart defect. From the tens of thousands of signals, De Groot has drawn the conclusion that “Every heart is electrically unique.”

“We're driving to Delft”
To get a better grip on all that data, she wanted to know the conduction velocity between measuring points as differences in the conduction velocity determine how the current pulse, which as you may know starts in the sinus node, spreads through the heart. That is, via the path of least resistance. She contacted her colleague Professor Ton van der Steen - physicist and ultrasound expert, and one of the first Medical Delta professors. Did he know anyone who could make such calculations? After a few phone calls, he jumped up. “Come on,” he said. “Get your coat on. We’ll drive to TU Delft.”

There she met Prof. Alle-Jan van der Veen. At the Microelectronics Department of the Faculty of Electrical Engineering, Mathematics and Computer Science (EEMCS), he had gained expertise on signal processing for communication and astronomy. Although cardiology is very different from telecommunications, the underlying mathematical models are similar: a signal running from A to B. From the bioelectric waves, Van der Veen was able to calculate the local conductivity, a quantity that, among other things, determines the conduction velocity. The local conductivity of the heart tissue is represented in a colour map. In some places, where there is a disturbance in the conduction, there are black blocks. This may indicate scar tissue.

Soon, Professor Wouter Serdijn (EEMCS) joined in for more sophisticated electrodes. “It is not rocket science,” he says now. “You can often help someone from another discipline with the existing state of the art. At the time, that was a contact strip and a multilayer flex print cable for the 192 signals.”

Joint research
In 2015, together with a cell biologist, Prof. Bianca Brundel, from Amsterdam UMC, the three submitted a research application to CVON (Cardiovascular Research Netherlands, part of the Heart Foundation) for the recording and analysis of the heart's bioelectric signals. This is fundamental scientific research into the activation patterns of the heart to understand what is normal and what is deviant.

Ultimately, the research should lead to better measuring instruments for diagnosing cardiac dysrhythmia to determine how serious the condition is, and hopefully also lead to more effective treatment than is currently available.

Just as electronics are sharpening the medical questions, the reverse is also true. The three-metre flat cable is quite cumbersome to use in practice and it also picks up all kinds of interference signals. Together with his PhD student Sampi Rout, Serdijn works on improving the connection of the electrode. There are no longer 192 wires to the electrode, but only 12 as chips reduce 16 signals to one. And 12 x 16 = 192. Twelve wires fit in a catheter, says Rout, just right for the electronics for the signal processing. This miniaturisation offers the prospect of multichannel signal recording of the heart from the inside via the groin, which would make the method useful for improved diagnosis. 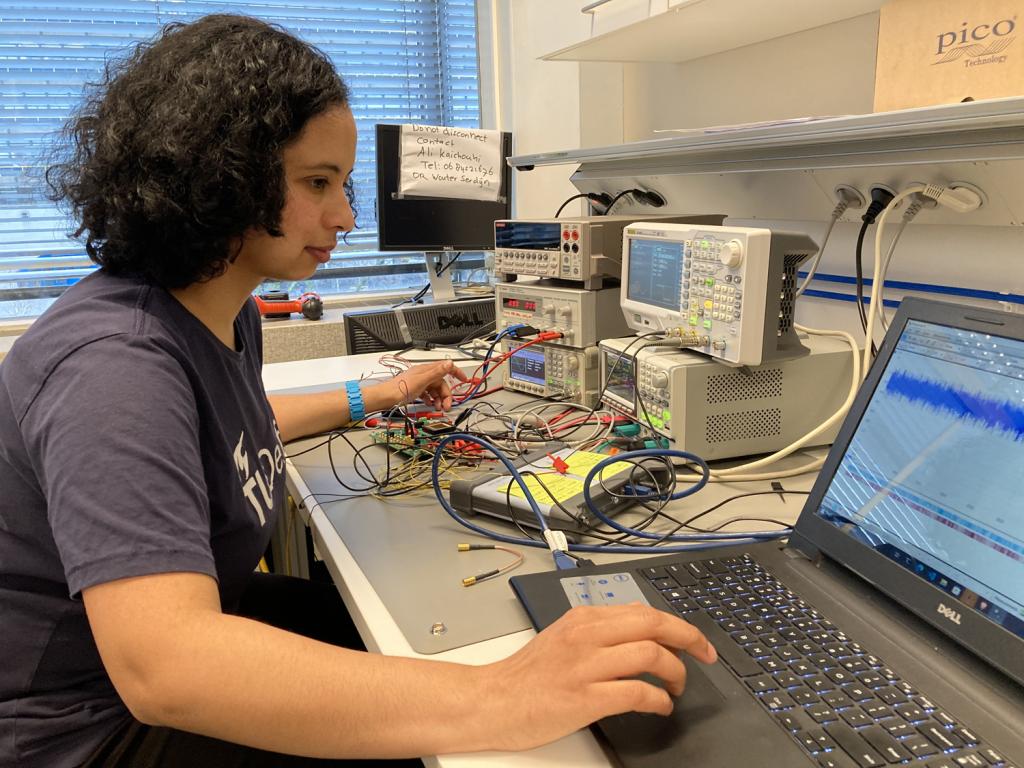 PhD student Sampi Rout works at EEMCS on multiplexing 16 signals to one to reduce the number of wires to the electrode. (Photo: Jos Wassink)

More than half of the PhD candidates at Dutch universities are in employment. The rest are trying for a PhD at their own expense or for example with a foreign grant.
Science