A wing that can actively absorb gusts of wind. The scale model of such a wing won three PhD students a prize this summer. The future wings react to changing air currents.

PhD student Tigran Mkhoyan (Faculty of Aerospace Engineering) observes birds with an engineer's eye. “On birds, each feather is connected to a pressure sensor. When a bird lands, it increases the angle of its wings in relation to the wind to increase friction and reduce lift.  This ‘stalling’ must not be too abrupt, otherwise the lift is lost. So the bird starts this movement carefully. But at the same time there are fluctuations in the wind to which it has to react. It does this by locally feeling the pressure with its feathers and using its muscles to adjust the position of the feathers accordingly. The whole process is entirely automatic.”

Pressure sensors, glass fibres for nerves and servos instead of muscles - the award-winning SmartX-Alpha wing model has it all. And what’s more, it reacts to fluctuations in the wind like a living organism. The three PhD students (AE) who worked on it won the Best Student Hardware Competition at the American conference on Smart Materials, Adaptive Structures and Intelligent Systems (SMASIS) on 14 September 2020. Preliminary results from tests in the Delft Open Jet Facility wind tunnel show that the active wing reduces the effect of sudden gusts by more than half.

A video on the SmartX-Alpha research project by Dreux Productions.

There are nevertheless important differences between birds and aircraft, says research leader Dr Roeland De Breuker: the speed of aircraft is many times greater, as is the load per square metre. Aircraft materials must therefore be much stiffer than natural wings, which makes it difficult to achieve comparable flexibility.

Nevertheless, they are working on this at the Faculty of Aerospace Engineering. De Breuker obtained a PhD in morphing wings in 2006. Since then, this line of research has remained an option in making flying more sustainable. Flexible wings are smoother than today’s wings with their flaps and slits. They change shape when the fuel consumption during flight changes the weight distribution, and they reduce the forces on the attachment to the fuselage so that the construction can become lighter. All in all, De Breuker estimates that flexible wings can save up to 10% fuel. 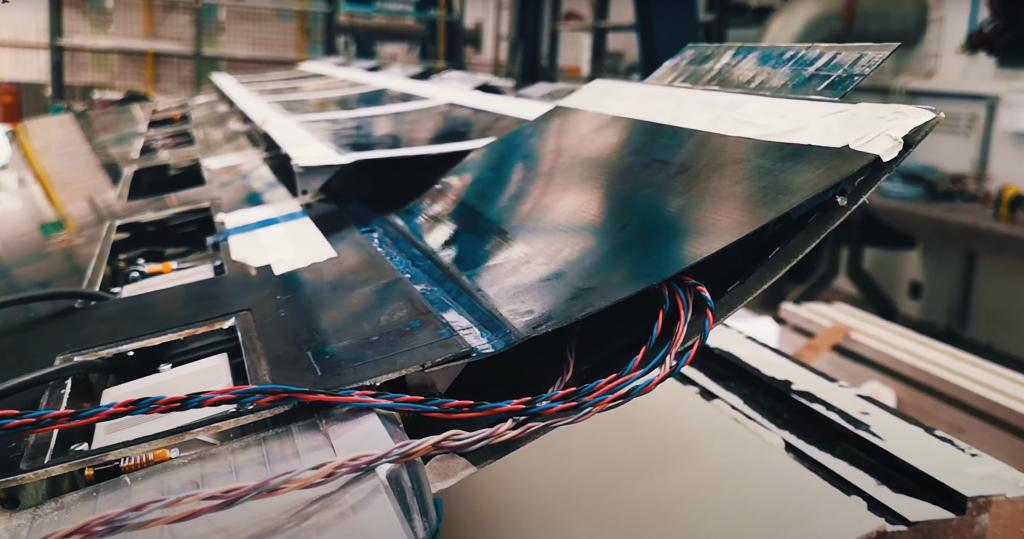 Moveable flaps and piezo-controlled fins enable the wing model to react on changes in the air currents. (Video still)

ScalableIf you look closely, you will see small fins sticking out behind the movable flaps. The flaps can move independently with a maximum frequency of 5 Hertz. The electrically controlled piezo fins are smaller but faster (25 Hertz). The flaps react to gusts, the fins to turbulence. Analysis of the wind tunnel measurements has yet to show how effective these counter-movements are.

De Breuker says a passenger plane builder has shown interest in the research. He can't say who that is. The hope now is that a morphing wing system will be tested on a ‘demonstrator’ - a large drone that acts as a model of an airliner.

Because the researchers used carbon fibre materials and servomotors that are common in the aviation industry, the concept is easy to scale up, says De Breuker. This pragmatic choice certainly played a role in winning the hardware award.

Dr Roeland De Breuker was in charge of the research that was dedicated to Professor Pim Groen, who passed away this spring. Prof. Rinze Benedictus took the initiative to bundle the ongoing research on morphing wings (De Breuker), optical sensing (Dr Roger Groves) and piezo materials (Pim Groen) with the aim of creating a 'demonstrator’. The morphing wing research is one of the studies at the LR Faculty that, just like the Flying V, aims at making aviation more sustainable.