Fat glass is the building brick of circularity

The solid glass façade of Chanel’s Crystal House in Amsterdam was their breakthrough. Three years later ‘fat glass’ for structural use has won colour, curves and circularity.

The Glass Lab in the Stevin II Hall of the Civil Engineering building has undergone a major extension. It has been the working place of two Greek PhD candidates, Faidra Oikonomopoulou and Telesilla Bristogianni over the last four years.

Their original workplace, a dark corner under the stairs, has given way to a roomy and light space. In the back, there are two large furnaces the size of walk-in cupboards. Dozens of glass cubes, forming a pallet of colours and patterns, lie on a large table. Next to them are small piles of glass bricks. Some look like Lego blocks, others are shaped like shackles from a chain. The material has changed as well. There’s not only colourless transparent glass but some shapes are semi-transparent with frozen whirls of colour while others are as opaque as marble.

Ironically, glass that is routinely trashed, because it cannot be recycled, often reveals unexpected beauty when melted and cast as small cubes. The form of the original glass, the size of the grains, the melting temperature and the speed of cooling all influence the outcome of the cast glass. “The higher the temperature, the more homogenous the melt,” says Oikonomopoulou. “This means that higher temperatures create clearer glass.” Bristogianni adds that the speed of cooling influences the crystallisation process. More crystals grow in the material during slow cooling. “Melting glass is like a cook book,” she says. “There are so many variables that will lead to a totally different outcome.” 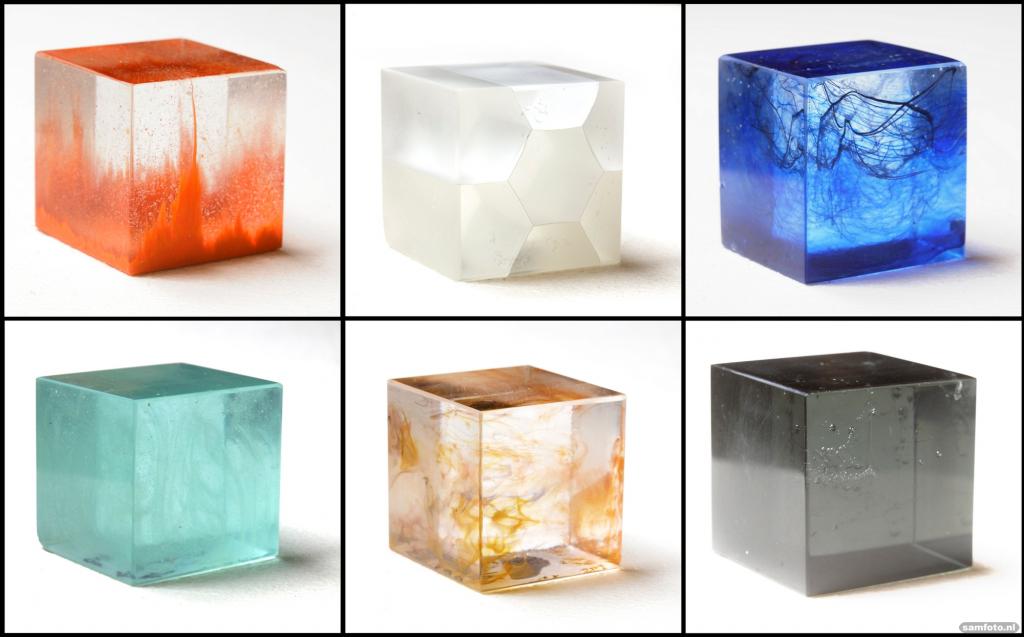 Samples from the Glass Lab, made from glass rejected from recycling. Photo: Sam Rentmeester

Showcase for sustainability
The Glass Lab has developed a process it calls Re3 Glass – upcycling waste glass into a visually attractive and durable building material. The procedure consists of recycling discarded glass, reducing material demand and the embodied energy, and making reusable building material that doesn’t require chemical glues. Reduce, reuse, recycle. That philosophy, applied to waste glass, earned them a nomination for the New Material Award 2018. The jury considered Re3 Glass to be a showcase for sustainability.