Agricultural sustainability mostly concerns itself with environmental problems. In developing nations, however, empowering farmers is the top priority.

Prelude to sustainable agricultureSustainable agriculture is a response to the industrial agriculture that thrived during the 20th century. While the industrial one managed to produce abundant food for a peaking population, it concealed adverse effects that humanity is experiencing now.  Who would have suspected that growing the same old crops each year while using enormous quantities of fertilisers and pesticides to maintain the “desired” condition is not good for the environment? Only later did we realise all the damage caused and started to look a better way to foster sustainability.

Scientists quickly introduced methods such as rotating crops or integrated pest management. These methods tick all the environmentally friendly boxes – alternating crops sustains soil nutrients and potentially disrupts pest habitat, for instance. These approaches are more apparent in the developed nations, where their motivation to achieve sustainability developed from environmental and ecological concerns.

In developing nations such as Indonesia, however, the local population’s values and context shape the main motivation. Fixing upon the ecological aspect is not enough; the actors’ participation and empowerment are equally important. “Sustainability will not work if the actors are not willing to participate,” says Kusnandar, a doctoral candidate from Indonesia at the TPM Faculty. His research focused on creating empowerment for agricultural stakeholders to achieve sustainability.

A fragile partnership This study took place in Indonesia, where agriculture is one of its key sectors. Ironically, most of its farmers possess only a small amount of land, around 0.6 hectares on average. This situation makes it very hard for them to produce crops that meet the economies of scale. On top of that, they also have limited access and knowledge about the market. The low level of production and the scarce market information make them to rely on the local traders, who act as the middlemen to the market.

This seemingly cooperative partnership is no more than an informal agreement. The deal compels the farmers to sell all their products to the one local trader. In return, the local traders give incentives to the farmers – either seed, fertilisers, or plain money. This scheme is problematic for both parties.

On the one hand, the farmers are in the dark about the market and the factors that influence their products’ price. This can be a quality problem or simply not in the market’s interest at that moment. On the other hand, the local traders have a limited influence on the farmers’ practices of their choice of product or their planting schedule. This inhibits the continuous production with a steady quality which is necessary to enter larger markets.

“This phenomenon has been around for decades,” Kusnandar sighs. As might be expected, there have been studies and interventions to address it. He continues, “Most of the programmes, foreign and international, only aimed at the farmers. They attempted to give farmers direct access to the markets. And the local traders? They were not included.” The reality is that most farmers do not even know the quality standard of a product, let alone have sufficient know-how to manage the market and quality. When the programme finishes, so does the fleeting enthusiasm of the participants.

Understanding is the key It became clear that these two entities – farmers and local traders – are inseparable for future studies. With his research, Kusnandar offered a new approach: real cooperation based on communication and mutual understanding. Because, as it turns out, that was missing from their ‘partnership’ that had been running for decades.

He organised two series of interventions, each consisting of several workshops and held one year apart. They started with four groups of farmers-local traders. Each group formation started with the local traders who already had an existing network of dozens of farmers. Each trader and his farmers made up one group. Next, these groups were facilitated in the workshop – aided by Padjadjaran University, a local university, and extension workers – to discuss and understand each other's circumstances. The goal is to make them wearing others’ shoes – to identify and acknowledge each problem – so that they are motivated to find solutions together.

To ensure everyone listens to each other and to minimise potential friction, Kusnandar arranged a simple yet vital step: reflection by paraphrasing. The idea stems from the observation that people are only interested in being heard but not in listening. Through reflection, other participants must be silent and mindful when someone speaks. If someone wishes to respond or express his ideas, he has to paraphrase the previous speaker’s sentence. In that way, understanding is almost guaranteed. 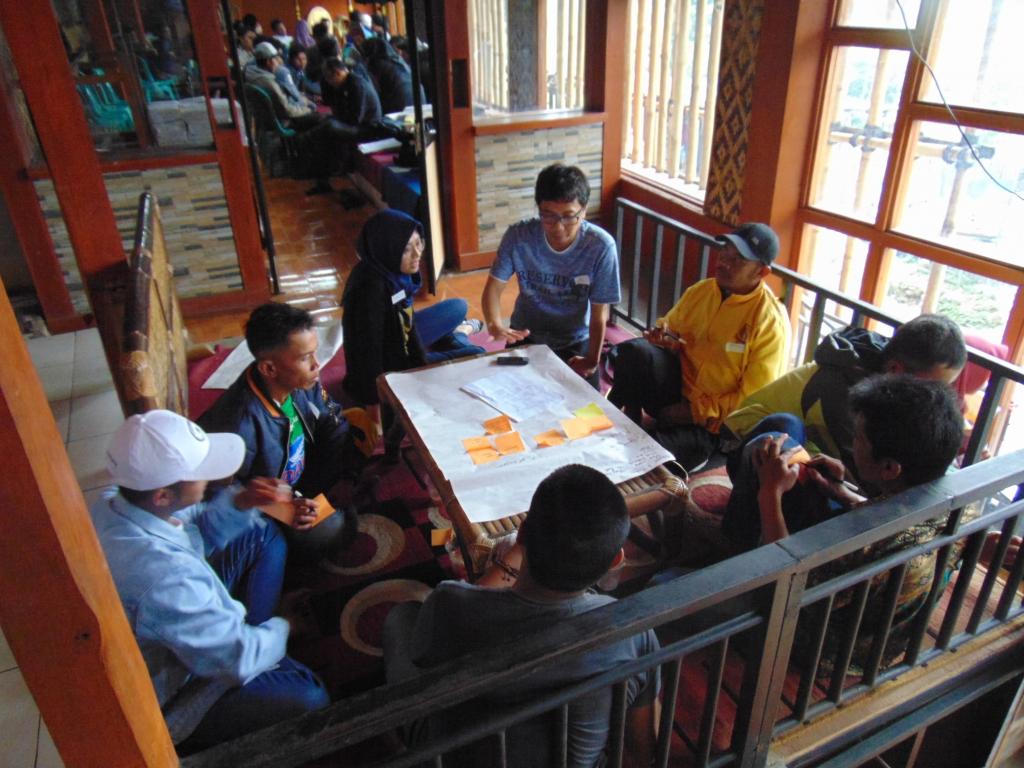 Kusnandar (blue shirt, in the centre) facilitated farmers and their local trader in a co-creation workshop.  (Photo: Private collection Kusnandar)

It did not always run smoothly. One group dropped out in the second intervention for unknown reasons. Kusnandar also discovered that most of the farmer participants struggled to construct a coherent sentence. “Most of them attended elementary school, but some did not even graduate,” he explains. Meanwhile, the activity was easier for the local traders since they are used to being proactive when negotiating with the farmers and the market.

Looking back, Kusnandar was impressed with the farmers’ grit. “At first, it was arduous, but after a couple of times, they managed to write and speak their ideas faster, even in the reflection phase.”

Real cooperation emerges Prof. Frances Brazier – Full Professor in Engineering Systems Foundations at the TPM Faculty who supervises Kusnandar's research – emphasises that the research qualifies as a participatory system, which is really about trust, empowerment, and engagement. “The magic is that they [the farmers and local traders] became more responsible for their own situation, which means a cultural change,” says Brazier.

For instance, two groups from the intervention programme solved the product grading problem together. Previously, farmers handed over all of the products to the trader, who most often sold the produce in bulk to the local market. To enter the more profitable supermarkets, careful sorting, grading, and packaging are essential.

‘They formed it on their own accord, emerging naturally’

The farmers in these two groups agreed to become involved in sorting, grading, and packaging. Additionally, they were willing to join in negotiations with supermarkets, providing them with more insight into the market. Together, the local traders and farmers learned more about market demand and their options over that year. Brazier adds, “The approach empowers the farmers as much as it empowers the local traders.”

On to expansion Following the programme, two formal groups of farmers and local traders have been established. They are the first of their kind in Indonesia. “They formed it on their own accord, emerging naturally,” stresses Kusnandar, who cannot hide his proud smile. They found out that more support and subsidy from extension programmes are available by organising as a formal farmer-trader group.

By involving government extension officers and local universities – such as Padjadjaran University – Kusnandar hopes that this alternative can spread across various regions of Indonesia through their participation in the programme's earliest stage. “If we rely only on presentations and publications, it will be quite hard to get the programme known. But through hands-on approaches and experiments, I believe it will.”