Aircraft design from home while working with a dozen others proved to be quite a challenge. (Photo: team WeFlyCycle)

At the end of their Bachelor’s programme, Aerospace Engineering students join the Design Synthesis Exercise (DSE). This exercise consists of 26 design groups on topics that are typically at the edge of the achievable.
Among the choices this year were: a reconnaissance drone to help land a helicopter; an electrical trainer aircraft; finding water and energy on Mars; and, the next generation fire-fighter plane. All the groups will give their presentations online in parallel sessions throughout the day on Thursday, 2 July 2020. Anyone can attend the online presentations through this special webpage. 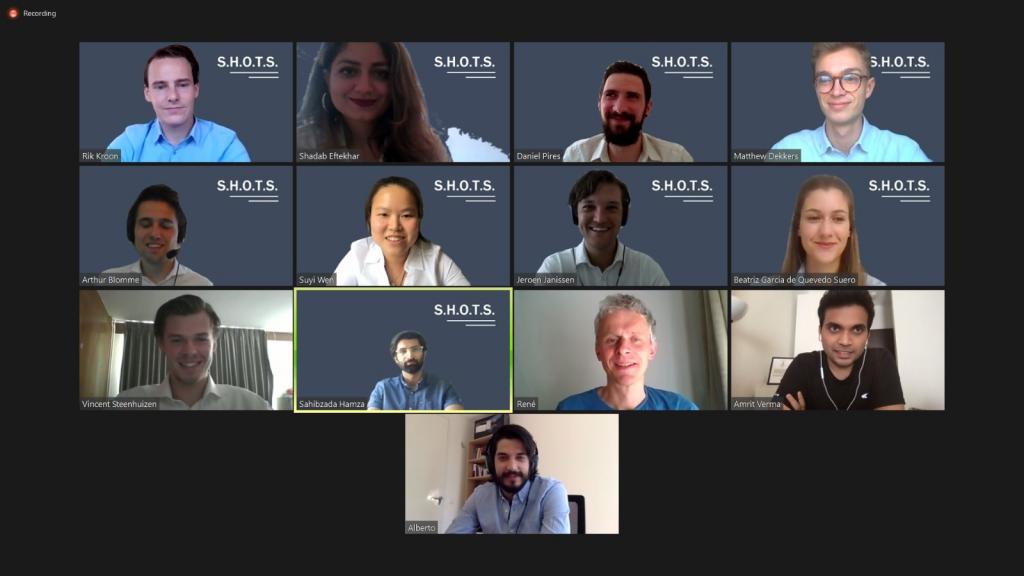 The students in team nine chose the WeFlyCycle project. Their mission was to design a recyclable aircraft that uses sustainable fuels. Delta spoke with some of them on a video platform.

What motivated your choice?
Shadab Eftekhar: “I have always been interested in aviation. But the corona crisis made it clear that aviation has an enormous impact on the environment. That revelation made me think about sustainability. From the various sustainable topics on offer, this one seemed the most realistic: a recyclable airplane seems feasible.”

What were the hardest nuts to crack?
Arthur Blomme: “The hardest to recycle are the composite materials, of which the share in weight has increased from 20% to 50% over the last decades. Currently, most of that material ends in landfill. Carbon fibres can be recovered, but there has to be a market for it. Currently there isn’t because the volume is too small.”

Shadab Eftekhar: “We chose hydrogen as a non-fossil fuel, in combination with bio kerosene. But the strict safety regulations make it hard to equal the performance and reliability of kerosene. Besides, the operational cost of flying on hydrogen is higher as well. The price of hydrogen has to come down drastically to level the playing field.”

What smart solutions did you come up with?
Beatriz García de Quevedo Suero: “We aimed to use materials that could be recycled. For the fuselage, there is no real alternative for the current carbon composites. But for the interior of the airplane we found we could work with bio composites based on flax or ramie (Chinese nettle, ed.).”

Arthur Blomme: “There is a lively market for used aircraft parts, but the trade in recycled materials is much less developed. We found that carbon fibres recovered from aircraft composites can retain 80% of their strength, which is good enough for use in components for cars, racing bicycles or other sports materials. We also found out that Airbus sells parts of used fuselages as furniture. They also recycle fabrics as trendy bags.”

Daniel Pires: “We located the large hydrogen tank in the back of the aircraft. We made the tail retractable to be able to reach it. Then we found out that a retractable tail also makes it possible to take out the complete cabin and replace it with cargo holds for example.”

What was the most valuable lesson for you from this project?
Sahibzada Hamza: “This project shows that the aircraft industry is not only about the application of technology. It’s also about economics and about the impact of the industry on real life.”

Vincent Steenhuizen: “This project taught us to operate effectively as a team in times of corona restrictions. Working strictly online was quite a challenge. We started off by shouting ideas into the group, and then realised that that didn’t work. We then developed a structure and followed the agenda.”

Suyi Wen: “I agree that the Covid-19 pandemic made communication the hardest part. We quickly learned not only to share our opinions, but also to listen to each other and find common ground. A structured agenda handled by a good chairperson made sure that everyone was heard.”

A render of the recyclable aircraft for 100-120 passengers with a range of 4,000 kilometres called Semi Hydrogen Operating Turbofan Systems aircraft or SHOTS. (Illustration: team WeFlyCycle).

The WeFlyCycle team, one of the 26 teams in the Design Synthesis Exercise, had participants from Spain, Portugal, China, Iran, Pakistan, Belgium and the Netherlands. Their supervisors from the Aerospace Engineering Faculty were Dr R.C. Alderliesten, A.F. Rius Vidales and Dr A.S. Verma.