“People are sometimes not that keen to be photographed. But later they phone or mail me to say that it was the best photo ever taken of them. (Photos: Sam Rentmeester)

Sam Rentmeester has been taking photographs for Delta for 25 years. The Library is now exhibiting his best photos. A chat about a drenched professor and an architect’s toes.

How many photos has Sam Rentmeester taken in 25 years? His analogue photos are hard to count, so he has no idea. And his anniversary? He only realised it was his anniversary when a company this year wanted to engrave pens with his name. Rentmeester did not even realise it, but his girlfriend saw two laurel wreaths marked with ‘25 years’. High time for an exhibition in the TU Delft Library for which he selected more than 100 photos.

How did you make your selection?“Some photos just had to be included. These are ones that I think are good or special in some way. Or they have an interesting story … but they still have to be good. I also enjoy it if viewers wonder how a photographer took a photo. For example, when the photographer photographs someone standing up to their waist in water.”

Rentmeester opens his laptop and looks for the folder of exhibition photos. He shows a black and white photo of Professor Emeritus of Coastal Hydraulic Engineering, Marcel Stive. 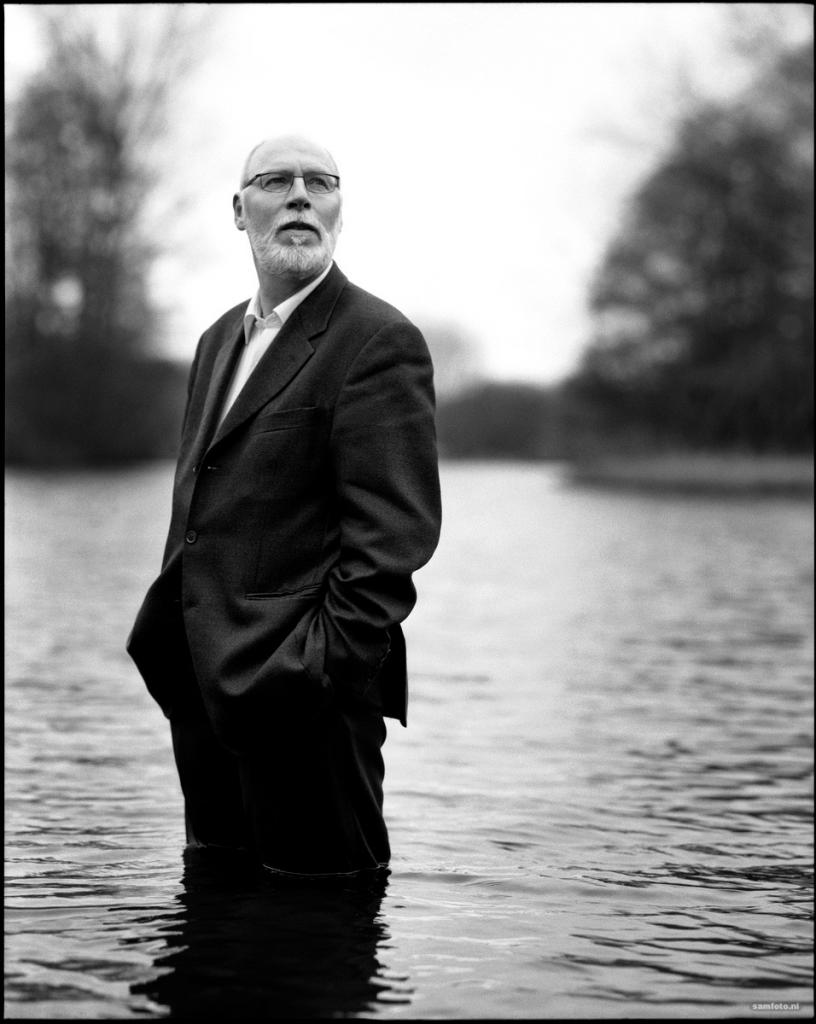 “If you show people the photo their first reaction is ‘Wow, great shot’. Then a few seconds later, ‘Oh, he’s in the water’. That’s funny. People’s reactions are often the same. Then I think ‘good’.”

Is it hard to get people to cooperate for these kinds of photos?“Sometimes. This photo in the water was in mid-December so that was more difficult (he laughs). The complicating factor of this photo was that I took it in medium format negative with a camera with which you needed to change the film after every 10 photos. I had three cameras at the ready to avoid changing the film while Stive was in the water. The day before the shoot I went into the water myself, in five different places, to see how deep it was and where I could shoot from the bank. I could not find a suitable spot where I could stay on the bank and where the water was the right depth. In the end, I had to go into the water to the same depth to take the photo.” 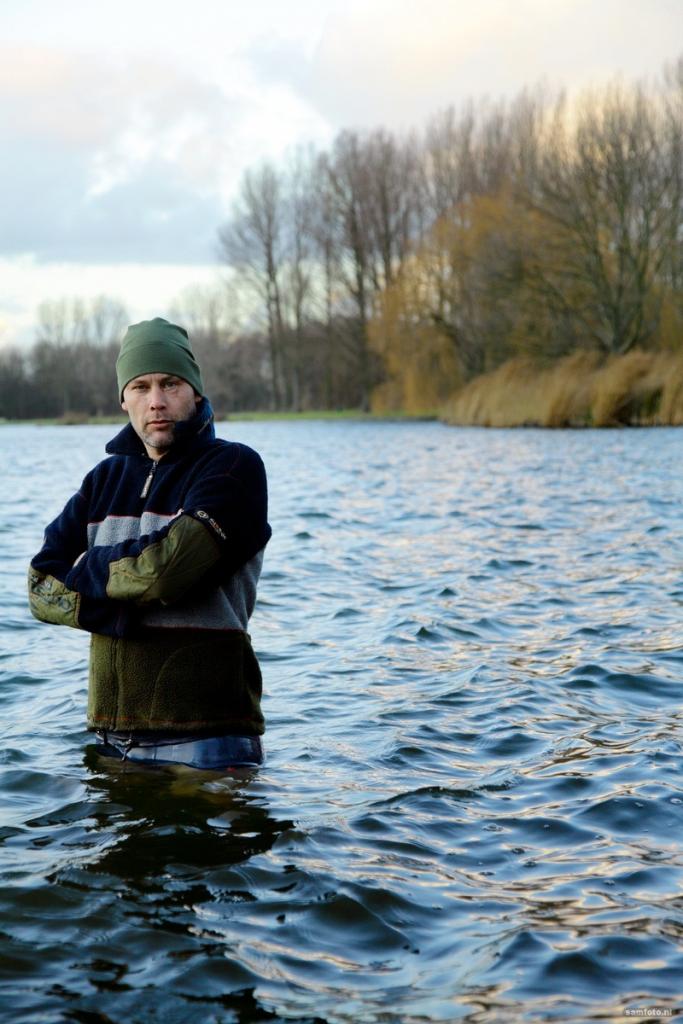 Really?“Yes. Only I was in my swimming trunks and Stive was in his suit. He wanted to wear his swimming trunks too, but that didn’t work. It’s weird if someone is wearing a jacket and a pair of swimming trunks. It was supposed to look like the most normal thing in the world, him standing in the water. I went in and out of the water three times to take the photo. When I was done I said he could come out. He had been standing still all that time and was really cold, but afterwards he really enjoyed it. Every time I had to take a photo of a colleague of his, he’d say ‘Be careful! He’ll put you in cold water!’”

So you prepare your photos well.“I had a dressing gown with me, hot tea, dry clothing and water shoes. These helped ease the discomfort. And I knew exactly how deep the water was. Checking for the right place together before the shoot would not work. I would not feel comfortable doing this so I would rather check everything beforehand.”

What do you do if people really do not want to be photographed?“That rarely happens. If you prepare well, you can almost always convince them. It was sometimes harder with analogue photos. You can show them digital photos. People sometimes think that they look silly, but on the photo they look good. You can convince them more easily by saying that you are not there to make them look ridiculous, but to create a beautiful photo together. We all want a great photo.”

You started at TU Delft as a student of materials science. Why did you change to photography in 1994?“I did a photography course at what was then called the ‘muzisch centrum’ (musical centre) and took to photography enthusiastically. When a photographer at Delta left, I wanted to give it a go. I said, ‘I want to try photography for one year and if it doesn’t work out, I will return to studying and finish my degree’. Everyone said that you can’t make a living out of photography and advised me against it, but it worked out quickly and I became a photographer.”

Who are your icons?“I like some photos of some photographers such as Stephan Vanfleteren, Sebastião Salgado and Irving Penn. I really like their portraits. Penn’s portraits are really simple in terms of lighting and composition – someone sitting on a wooden block with a blanket and a lamp. That’s it. You could add a lot more light if you wanted to, but the photo is about how people look. Simple is often better.”

Is that not over-stylised?“In part, but it’s also because it’s better to take photos quickly if you can. It’s best to be finished within 10 minutes. A model can hold an expression for 10 minutes, but that’s hard for most people. They tend to start laughing. That usually does not work. If people stand still they pull faces if they laugh. If they laugh, people take their story less seriously. Personally, I find it hard to take a story about a failed start-up, for example, seriously if the person is laughing. The people I photograph usually look quite serious. Laughing during the OWee is fine of course. It’s not that I only want to photograph dismal people.”

Which photo are you really proud of?Rentmeester peers at his laptop and looks earnest. “Proud … proud …” He shows several photos and tells great anecdotes. One is about the photo of Francine Houben, the architect who designed the university library at the Mekelpark. “She said that she felt great walking around on bare feet. So that’s how I photographed her. Her feet had to be visible.”

So raise the toes?“Yes, just a little. But you don’t see them at first. You first look at her face and then think, ‘hey wait a minute’.”

What was your first photo for Delta?“A volleyball tournament. I went there on Saturday and Sunday. Saturday to take photos and develop them, and just to be sure, took more photos on Sunday.”

Looking back, what do you think of those photos now?“None of the volleyball photos need to be in the exhibition!” (He laughs)

Rentmeester shows a black and white photo of a man wrapped in a toga who is about to throw a discus. 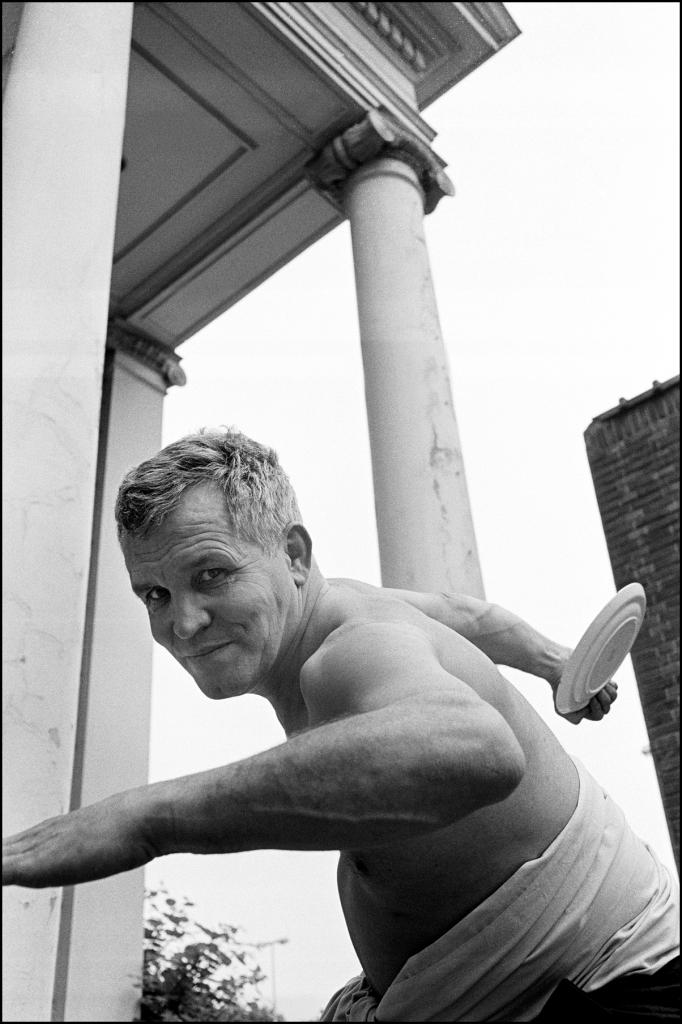 “This man had already featured in Delta so I suggested that we do something different this time. I said to him, ‘I’d like you to wrap yourself in a toga and stand in front of a synagogue in the town centre of Delft. If you look upwards, the synagogue looks like a Greek temple and you’ll then look like a Greek …”

God?“Yes. The man said, ‘You don’t think I am going to stand in the middle of Delft bare-chested for the photo?’ I said, ‘I don’t think so, but I hope you do’. He did it in the end. We didn’t manage to borrow a discus from the athletics club so so we used a plate in the end. But that doesn’t matter. I think it was the first time I did something like this and it worked. I heard later that he thought it was really cool.”

Question of conscience. What do you think of Photoshop?“You need it for the right colours and contrast. But you really mustn’t add things to or remove things from most photos. I now do things in Photoshop that are difficult to do in the darkroom. For example, in the case of older men, their nose hair sometimes catches the light. I adjust the photos, but I usually try to photograph in such a way that I don’t have to do this.”

Rentmeester comes back to pride.“People are sometimes not that keen to be photographed. But later they phone or mail me to say that it was the best photo ever taken of them. They then want to use the photo themselves or say that they want to put it on their mother’s mantlepiece. That’s fine with me.”

Two out of three TU Delft students experience sexually transgressive behaviour during their studies, a Delta survey reveals. How did our investigation come about?
Campus

Two out of three TU Delft students experience sexually transgressive behaviour during their studies. This was revealed in a survey by Delta.
Campus