“Do look up!” say TU Delft alumnus and her professor

Near-earth asteroids are a returning worry for earthlings. (Image: NASA)

Remember Chelyabinsk in February 2013? Dashboard cameras in Magnetogorsk (Urals) recorded how a white-hot sphere drew a thick line through the early morning sky. Footage from surveillance cameras in Chelyabinsk, 300 kilometres away, bleached out as the meteor passed by. Later, the shockwave blew out all the windows of Soviet flats. A zinc factory collapsed after being hit by debris. At 17 metres in diameter and weighing 10,000 tonnes, the Chelyabinsk meteor was a powerful reminder of the danger that chunks of space debris can pose to the earth‘s inhabitants. After all, the dinosaurs didn’t live to tell the tale about what hit them. (That asteroid was estimated to be a thousand times bigger).

A triumph of technology

A young academic and her professor are alerting the world to the danger of hundreds of thousands of chunks of rock, ice, and metal on their way through space. That sounds like a film script. But in this case, it is about Lenka Husárová (working at the Galileo Ground Control Centre near Munich) and her professor Bernhard Rainer Brandl, an astronomer from Delft University of Technology and Leiden University. They, Dr Stephanie Cazaux (TU Delft Faculty of Aerospace Engineering) and Dr Michael Mueller (SRON/RU Groningen) are working on a serious and original research proposal aimed at the James Webb Space Telescope. The telescope was launched late last year and recently sent its first image over a distance of 1.5 million kilometres - a triumph of technology. 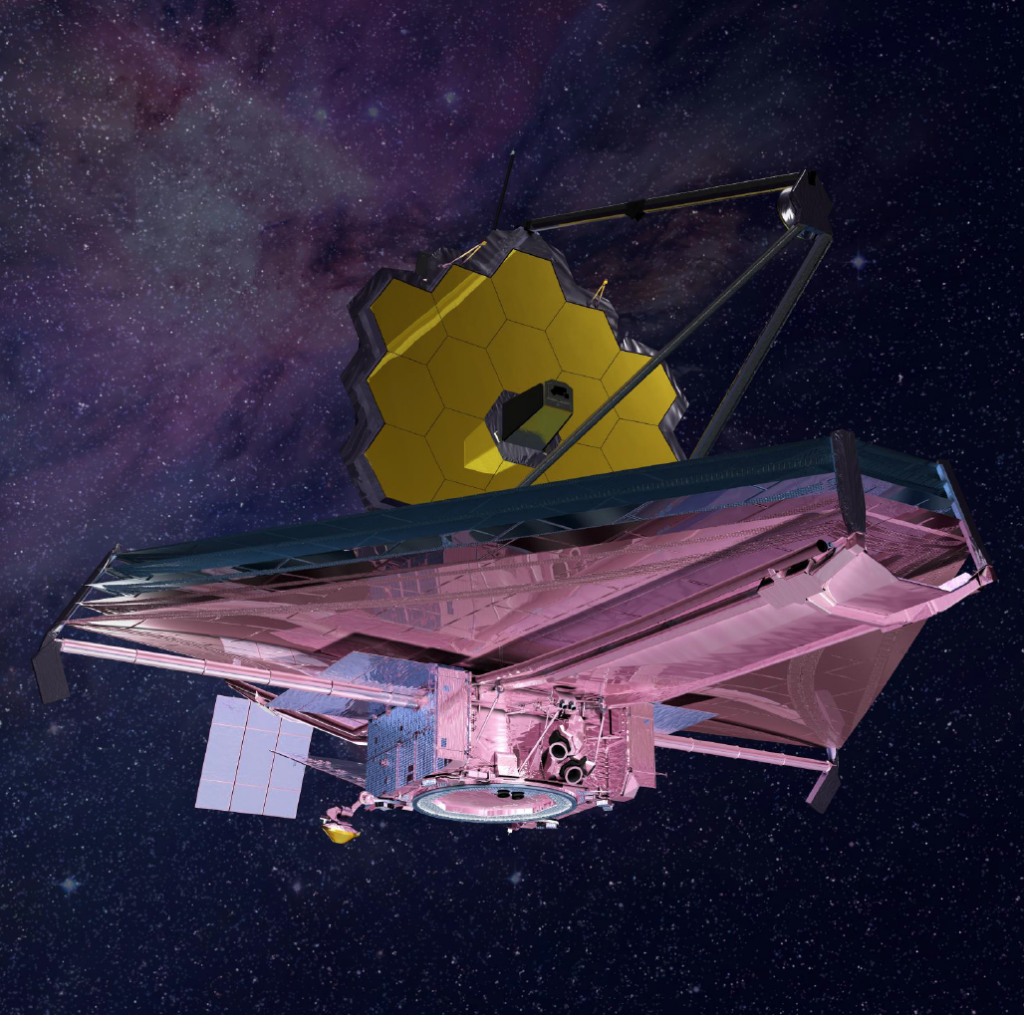 Artist’s impression of the deployed James Webb Space Telescope. The yellow mirror is well shielded from the sun by a stack of ultimate insulation layers. (Image: NASA)

Infrared telescope
NASA's James Webb Space Telescope (JWST) is designed for observations in infrared thermal radiation. Far away from Earth, with its back to the sun and shielded from it by a stack of ultimate insulation blankets, the JWST peers into the earliest past of the universe. In astronomy, looking further away means looking further back in time. The expansion of the universe has caused the wavelength of optical light from distant objects to shift towards the infrared. The JWST was created to look 13.5 billion years back in time to the baby days and edges of the universe, when the first stars and galaxies lit up in the darkness that had prevailed until then.

But there is also much to experience closer to home, Husárová and her companions say (she graduated on this idea in 2018) within our own solar system. From the point where the space telescope is located – the 2ndLangrange – it has an excellent view of the ‘main asteroid belt’. “That’s where most of the asteroids are,” says Husárová from Munich. “The telescope has a good sensitivity, so you might also be able to see the distant Trojans (two other groups of asteroids that share an orbit with Jupiter). And of course, you can also see asteroids that orbit closer to the Earth. Those are the ones that could impact on Earth. Then there are also comets with very long orbits that come back occasionally. So yes, there is always a chance that you will find an asteroid that might get on a collision course with Earth in the future.”

“Most of the asteroids that JWST will study are happily orbiting the Sun in the asteroid belt between Mars and Jupiter,” her thesis supervisor Professor Brandl explains. “However, even if rarely, they may be kicked out of their orbit and fall on Earth and become meteorites.”

We would like to scan the camera images for passing asteroids

Observations from the furthest galaxy and of rocks passing in front of the camera go hand in hand, Husárová says. One of the four instruments on board the JWST is MIRI (Mid-Infrared Instrument), which includes both a camera and a medium resolution spectrometer (MRS). The instrument is tuned to just nascent stars billions of light years away, as well as to barely visible comets and objects in the Kuiper belt at the edge of our solar system. “When the spectrometer is being used, the camera is also on,” says Husárová. “Most researchers are interested in the spectrometer because it provides information about the chemical composition of a star or the atmosphere of a planet. The camera is on, but is not used at the moment. We would like to scan the camera images for passing asteroids. Researchers then just have to tick the box that they want to download camera data as well.”

Empty space
Asteroids are inactive relatively small rocky celestial bodies, remnants from the beginning of our solar system. Most of the millions of asteroids are smaller than 100 metres in diameter, while some have cross-sections of hundreds of kilometres. More than a million are registered in a NASA database and the number is steadily increasing. Yet Husárová expects to add only 7,000 in five years. “There are millions of asteroids, and you may observe most of them passing in front of the camera,” she explains, “but the point is that space is so vast and empty that you end up not getting many in your frame. My calculation comes up with about 200 known asteroids and just under 7,000 unknown or ‘new' ones.” An observation means determining the position and/or orbit (for multiple positions), the diameter, and the whiteness ('albedo’) of an asteroid that gives an idea of its composition (ice is white, rock is black).

Nice to know what's over your head

Of course, it is nice to have a better idea of what is hanging over our heads. But even if you are not overly concerned about the end of time, it is good to know more about asteroids, say Husárová and Brandl. Asteroids' physical composition and spatial distribution can tell us more about the origin of our solar system. And who knows, one day they could provide us with metals and minerals that are, or have become, rare on earth. In addition to iron, nickel and cobalt, gold is also on the list of asteroid minerals.

The researchers hope to publish their article this spring. In it, they ask astronomers to download MIRI camera data to survey asteroids. “It does not take extra observation time, it is just a question of ticking the ‘camera' box so that the data will be sent,” emphasises Husárová. One can only hope she and Brandl will get more attention than student Kate Dibiasky and Professor Randall Miny in the American sci-fi parody Don’t look up.