Design competition 3mE in tropical temperatures

Over 550 first-year mechanical engineering students demonstrated their 'climbing stacker' last Wednesday. There was no public, but the students again built something special.

For years, the design competition has been the undisputed highlight of the year for first-year mechanical engineering students. They work in groups on tough assignments to design and build a device. In recent years this has included a robo-hopper, a market lander and a package dog. There is no shortage of creativity. To conclude the assignment, there is a competition on the final day in which all the teams compete against each other to see which device does what it was designed for best and fastest. Last year, the final was cancelled due to corona and only a few designs were actually realised.

Festival atmosphere
This year, the organisation managed to get 90 teams of mostly six people to make and demonstrate their designs. The only thing missing was the audience, but that did not diminish the atmosphere.

With each group wearing a different coloured shirt, the whole thing even felt like a small festival. Students are happily hanging around the competition area. They are nervously putting the finishing touches to their climbing stack or checking out the competition. The teams have 10 minutes to build a complete tower as quickly as possible. Group 22 is well on its way and their performance does not go unnoticed. "Wow, this is really cool," a fellow student from group 30 cheers them on. 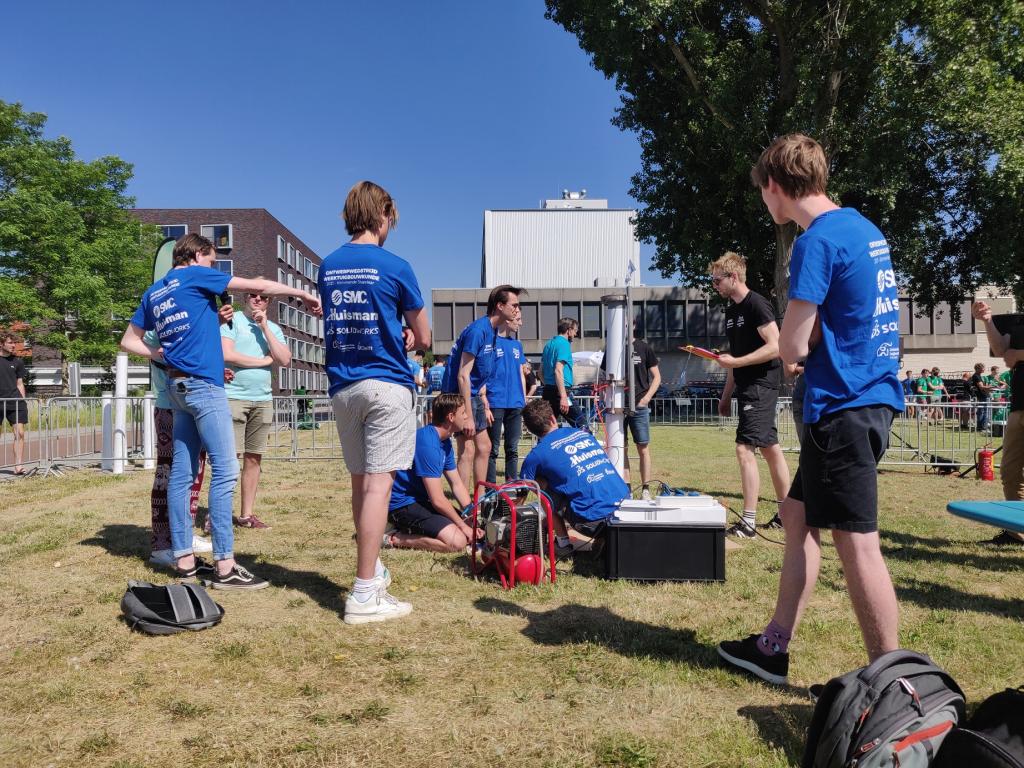 Group 22 on its way to the top. (Photo: Marjolein van der Veldt)

Project coordinator Dr Regine Vroom (3mE) was very pleased that everyone was at the right place at the right time with the right gear. "We had to rearrange the competition," she says. "We made a schedule of who can build where and when and who has to dismantle again." The demonstrations took place on two sets of three spots behind the 3mE building. While one set was in use, the other was changed. Judges were sometimes able to take shelter under a parasol, and were given ice-creams by the study association Leeghwater to help them endure the tropical temperatures.

Wind Turbines
The task of a climbing stacker was necessitated by the arrival of increasingly large windmills, which are more and more difficult to assemble with a crane. The climbing stacker picks up a tower segment, climbs up the pole and puts the new part on top. Then comes the next segment. The task starts with a one-metre high pole on which three half-metre high segments can be placed. The fastest team (number 31) did it in 32 seconds, the second fastest (team 85) needed almost a minute and the bronze finalist (team 36) needed two minutes.

"We deliberately make the task difficult," says Vroom. That puts the students on edge, so they come up with original ideas. During the design process, they are guided by teachers who help them learn from their mistakes and improve their design. As a result, most teams appear in the finals with a well-functioning device. Of course, anything can go wrong at the last minute. "An engine breaks down, or something falls down. That then requires some improvisation to solve.”

This happened to group 85, which eventually took home the second prize as well as the Science Center Trophy. During the finals, it turned out that their stacker no longer worked. The team members literally and figuratively broke out in a sweat. Thanks to a new part, the problem - a screw in the axle that was rotating wrong - could be solved just in time.

Discharge
Due to the corona restrictions, the students spent less time at the Faculty than usual. Much of the designing was done during online meetings rather than during discussions with each other around the prototype. Students also spent less time in the workshop. Asking for help, or visiting others or the teacher were therefore a lot more difficult this year.

On the beautiful summer's day of the finals however, it was not the limitations that counted, but rather the fact that 90 teams of first-year students were once again able to build their own design and take part in the competition. Having surmounted the corona constraints gave the sometimes laboriously but brave climbing contraptions a hopeful symbolic charge.

And although the organisation regularly pointed out the need to wear a face mask and keep a distance of one and a half metres, one call sounded even more frequently. The motto was to take a photo with the grey inflatable elephant in exchange for a free ice-cream and a tape measure - an essential item for every TU Delft engineer.

Lockdown over in higher education

The lockdown restrictions in higher education have been lifted. The guidelines regarding face masks have been tightened.
Education