Internationalisation at the TU Delft is currently a hot topic. The question is not only how many international students the university can handle practically, but also to what extent it takes a toll on the quality of education and the TU Delft ‘brand’. On Wednesday, we held a Delta Debate where a panel of three experts discussed three statements about internationalisation. The debate was organized by the TU Delft Debating Club, Teaching Lab, Studium Generale and Delta. On the panel were Timo Kos (director of education and student affairs), Pasquale Cirillo (assistant professor of applied probability and Education Fellow) and Tanya Srivastava (PD Eng. Trainee and secretary of the Debating Club). The chairs for the audience were divided in a pro and con side, so the audience could pick a side during the debate.

The audience was almost unanimously against this statement, with only a few people sitting on the pro side. The panel was more divided, with Kos arguing in favour of the statement. He said that the university should uphold the “Delft way of doing things”, and that that would be impossible if, for example, 80% of the students is from Asia.
Srivastava then agreed that there is a Delft way, but that that has nothing to do with nationality, but rather with the high standard that is set for everyone. Cirillo on the other hand objected to the existence of a Delft way, saying that he teaches the same way here as he did in Switzerland, France and Spain.
The discussion shifted to the language aspect. English is the language of science, but the level of English of some people is not good enough and it impedes their teaching and/or learning. Kos also said that if the university would open up for everyone, applications would sky rocket and it currently lacks the tools to manage this. Also, Delft would be too small a city for too big a university. The president of the Indian student association said that for him the Delft culture is how he was accepted, and that it is one that invites other cultures instead of turns them away. Kos agreed that the Netherlands should be an open country with a welcoming culture. Srivastava mostly emphasised that the quality of students or teachers has nothing do with nationality, and everyone in the panel agreed. 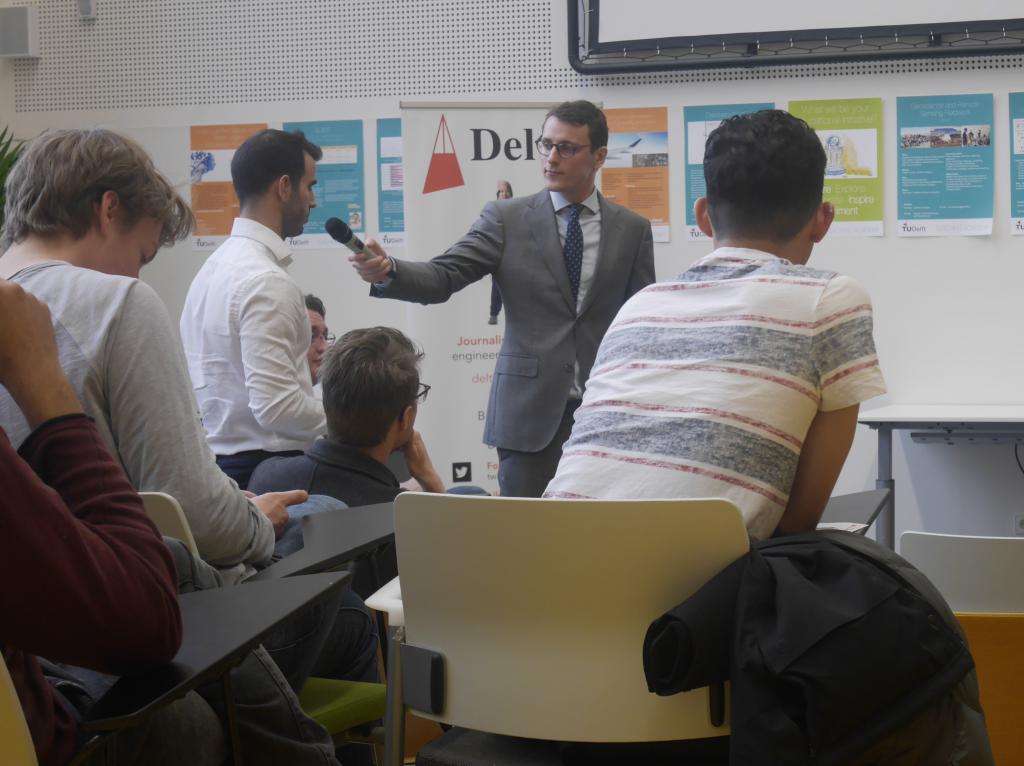 The audience was more divided over this statement than with the first one. Srivastava started the debate by saying that she is very much against this statement, as admission would be a lottery of birth and goes against the Delft spirit. If your qualities are good enough, why should nationality matter? Cirillo also disagreed, saying that you cannot admit students on the basis of nationality in the European Union so it makes no sense to even discuss the question. Selection based on nationality is just a way of postponing the problem of too many applications. He also said that he thinks some Dutch students are not proficient in English, and that internationals should have compulsory Dutch courses. Kos on the other hand argues for a quota that distinguishes between students from the EU and outside of it, to keep the size of the university within manageable proportions. He said Delft had pushed for internationalisation in the past, but at some point it went too far, and it now needs tools to manage numbers. He also emphasised that TU Delft is a public university, which means it is funded by Dutch taxpayers. On these grounds, Dutch people should have some sort of priority. Cirillo sympathises with this point, saying that as Dutch people are paying, they should feel the benefits of the university. Srivastava took a more moral standpoint, saying that making nationality a criterion for selection could set a dangerous precedent and is a slippery slope that could lead to something very unsavoury. She said it feels a little bit like “the Netherlands First”. Both Cirillo and Kos agreed with this, but they both emphasised the practical side of the debate. 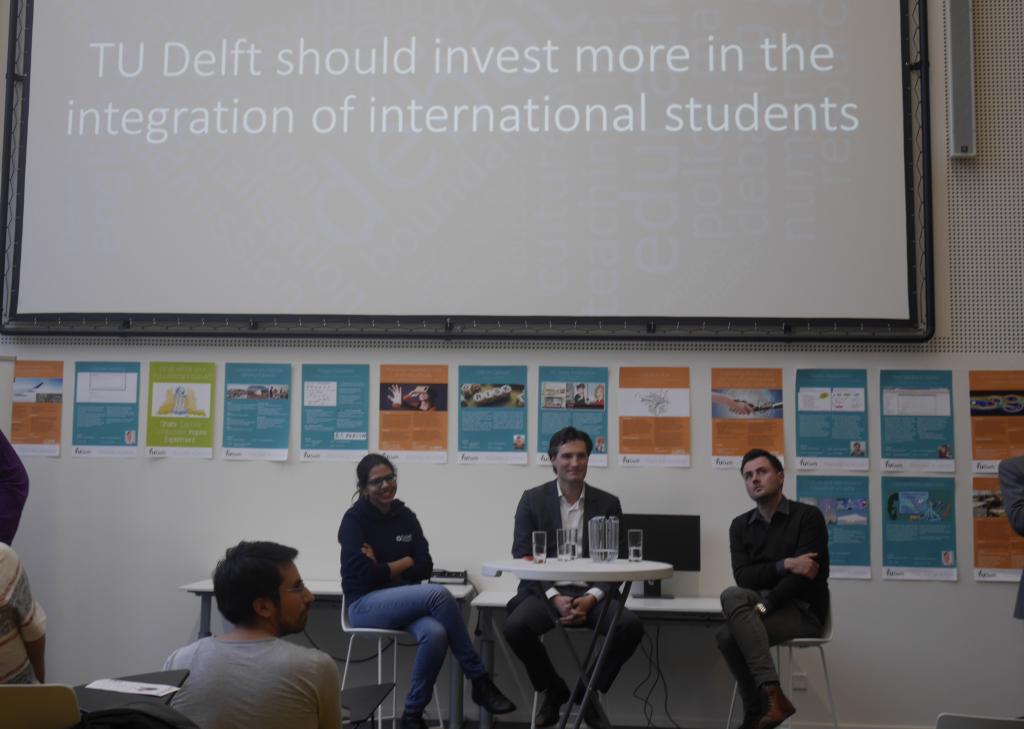 The panel and the third statement of the debate. (Photo: Nora de Vries)

Most people in the audience were in favour of this statement. Cirillo started off by saying that investment always sounds nice, but it does not necessarily have to be about money. In his classes, he makes sure that the groups he forms are always mixed, which improves integration for free. Kos agrees with this, and also says that it should be a two-way street, where Dutch students also do their best to integrate with internationals. Collaboration and making friends across borders is also part of the university experience and your own skills set, so he encourages Dutch students especially to look beyond their own cultural group. Srivastava also agrees with this, saying that the burden lies with student associations who should put more effort into helping their members step out of their comfort zones and interact with other cultures. One of the audience members also noted that integration is already hindered from the start because the introduction weeks for Dutch and internationals are split. Kos then said that this has bothered him for years, but that now, finally, they will be integrated!

Compulsory Dutch courses
The debate then shifted back to whether TU Delft should require international students to take Dutch courses. Cirillo is strongly in favour of this, while Srivastava distinguishes between bachelor and master students. Some students are only here for their master’s and do not plan to stay. For them it would be even more pressure to also have to learn Dutch. Cirillo then said that he does not mean that he wants to introduce a 180 ECTS course in Dutch, but just a minor basic course for something like 3 ECTS so that students can learn how to introduce themselves and order a beer. Kos mostly sees the benefits of introducing Dutch courses for students that want to find a job in the Netherlands later. It helps them make a better impression and shows some affinity with the country. He also said that the university does not get any money from the state for the Dutch courses that they already offer, so it would be expensive to offer it to all international students.

The next Delta Debate is on Wednesday April 25th. The topic is ‘The Future of the Classroom’. 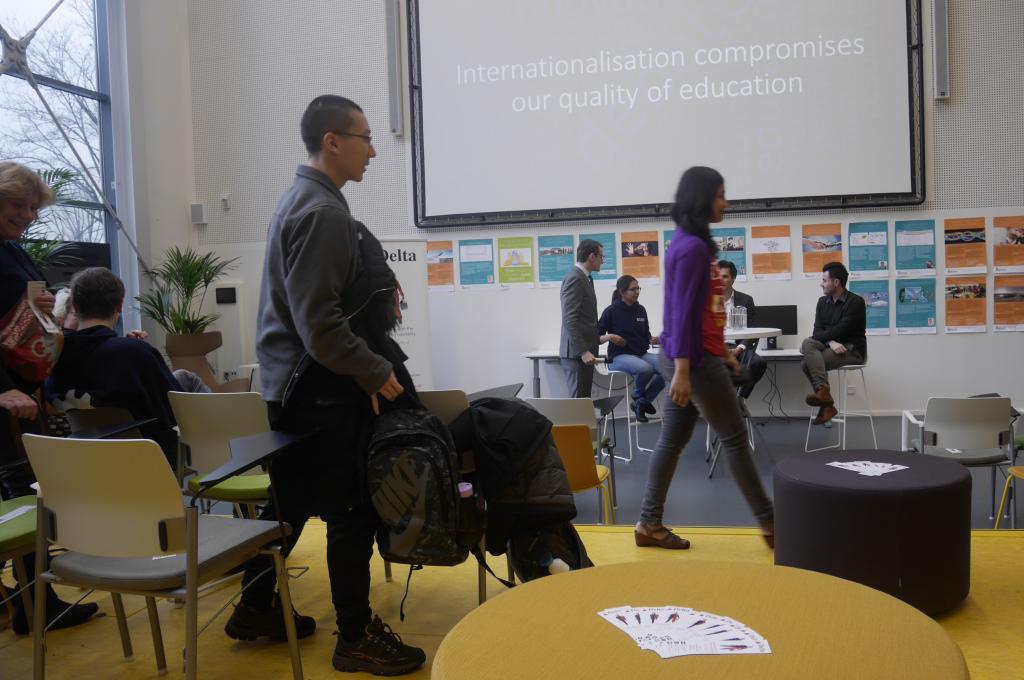 The audience could indicate whether they were in favour or against a statement by changing their seats. (Photo: Nora de Vries)

Face masks can be taken off, and work on campus may resume

The lifting of restrictions shortly means that face masks can be taken off and staff can return to campus. For students, not that much will change.
Campus

To support the hospitality industry, Delft is easing things for terraces, live music and small events. Student associations will also be able to do more.