Delft Young Academy will advocate on behalf of starting researchers

The lives of young researchers are not easy. Their voices must be better heard. The Delft Young Academy should ensure this. (Photos: Tomas van Dijk)

Following other universities, TU Delft will have a Young Academy, a platform for starting researchers to philosophise about academia and advocate for their interests.

“You are the future of TU Delft. You are the ones to determine the direction that TU Delft should take.” Like a sort of Uncle Sam recruiter, Vice Rector Magnificus Rob Mudde encourages his listeners to take action and get a Young Academy up and running at TU Delft. He addressed an audience of about fifty academics last week (on 3 November) in the Aula.

Wageningen, Nijmegen, Groningen. They’re everywhere, Young Academies. These are platforms where starting researchers can discuss career opportunities, interdisciplinary partnership, policy and the role of academia in society. These Young Academies resemble the KNAW (Royal Netherlands Academy of Arts and Sciences) national Young Academy. TU Delft did not have one itself, but this will change.

Last week four TU Delft members of the national Young Academy – multimedia expert Dr Cynthia Liem (EEMCS); Professor of Opto-electronic Materials Arjan Houtepen (AS); Professor of Energy & Climate Ethics Behnam Taebi (TPM); and Nano Scientist Dr Anton Akhmerov (AS) – held a meeting in the Aula to see if there is enough interest for a TU Delft Young Academy. They must have believed that there would be enough interest as they had called the meeting the Kick-Off of the Delft Young Academy. 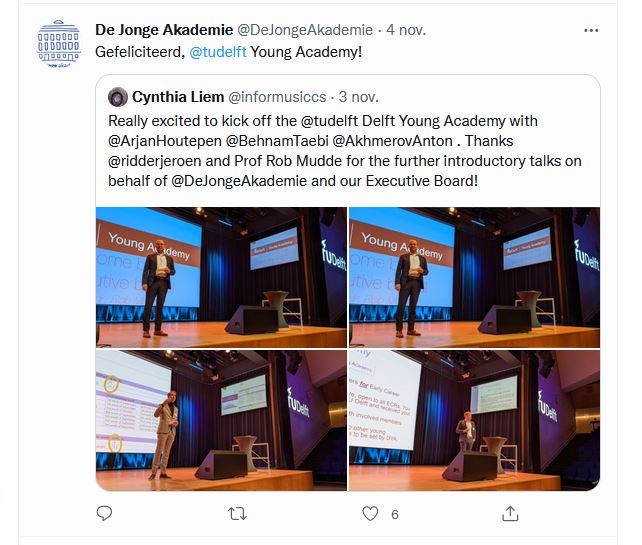 The objective was to create a group that would get things moving and to think about the type of issues that the Delft Young Academy should cover. What occupies the minds of starting academics and what are their expectations of an Academy?

“The Young Academy targets researchers that have earned their PhDs less than 10 years previously,” explains Cynthia Liem between the activities. “The first phase is primarily exploratory. We need to think about how we would like the Delft Young Academy to develop. We are looking if there is enough interest and motivation among TU Delft early career researchers for an initiative like this. If there is enough interest, the Academy will start in 2022.”

At most universities, you can only become a member of a Young Academy at the invitation of deans or the executive board. But the TU Delft version will accept all TU Delft researchers that have earned their doctorates within the last 10 years and who sign up.

After the plenary, groups of four to six interested people went to brainstorm and to list the issues that they, as starting academics, struggle with.

Martin Skrodzki, post-doc at the Computer Graphics and Visualization section (EEMCS) does not need time to think. ‘Academic Nomadism’, he writes with a black marker on a flip chart.

“The life of a starting academic sounds exciting at first,” he says. “You visit lots of countries and come into contact with different cultures from all over the world. And you are paid to do this too. But I moved from Germany to the USA, Japan and the Netherlands within two years. Before you have even got to know a place well you are off to the next one. This is not exciting, it is stressful. And it is hard to combine this with things like starting a family. I hope that the Delft Young Academy will help have the voice of young researchers heard and work on more permanent positions for starting academics.”

Atul Bansode, researcher at the Catalysis Engineering Department (AS) sits next to Skrodzki. He is interested in expanding his network. “I hope that the Delft Young Academy brings researchers from different disciplines together. The contacts of young researchers are often limited to the academics within their own department. That’s a pity.”

“And it would be good if the Delft Young Academy becomes a strong platform where the problems faced by starting researchers, like funding for research proposals, can be discussed. It seems like an unwritten rule that you need to obtain an X number of subsidies to become a tenure tracker at TU Delft.”

Bansode’s table companions, none of whom, like Bansode, come from the Netherlands, agree that there is a lack of transparency. You enter the Dutch academic world and have no idea about how things work. Bansode continues. “It would be helpful if you were given a book when you arrive at TU Delft in which the unwritten rules are explained.”