Like many other innovations, the Row4 was born out of frustration. When rowing coach Peter Kolsters (Laga) tried to keep track of the four boats he was coaching, he typically rode his bicycle along the canal while watching and handling four stopwatches simultaneously and trying to remember what to say to which team. Coaches want to know the speed of the boat and the number of strokes per minute. But wait a minute, he thought. This is the 21st century. We should be able to make something better.

Student rower and applied physics student Sybren Zwetsloot quickly put the technology together: GPS, a magnetometer, an acceleration meter, a microcomputer and a radio communication channel with a six kilometre range. That's the basics for a tracker on a boat. The coach has a standard tablet, which may be attached to the handlebars of his bicycle, showing the status of up to four boats: tempo, acceleration curve, and speed (expressed in time over 500 metres). A special dongle in the USB-port maintains radio contact with the trackers on the boats. The Row4 product consists of four trackers and one tablet with dongle and software. It comes under the trade name RowCoaching.

Their company, called ‘Otis Insight’, is housed on the third floor of a start-up incubator in The Hague. Zwetsloot works on the electronics, while a 3D printer behind him slowly produces yet another dome-shaped tracker housing. Meanwhile, Kenneth Besamusca, who studied philosophy in Amsterdam and rowed with Nereus, explains the business plans. 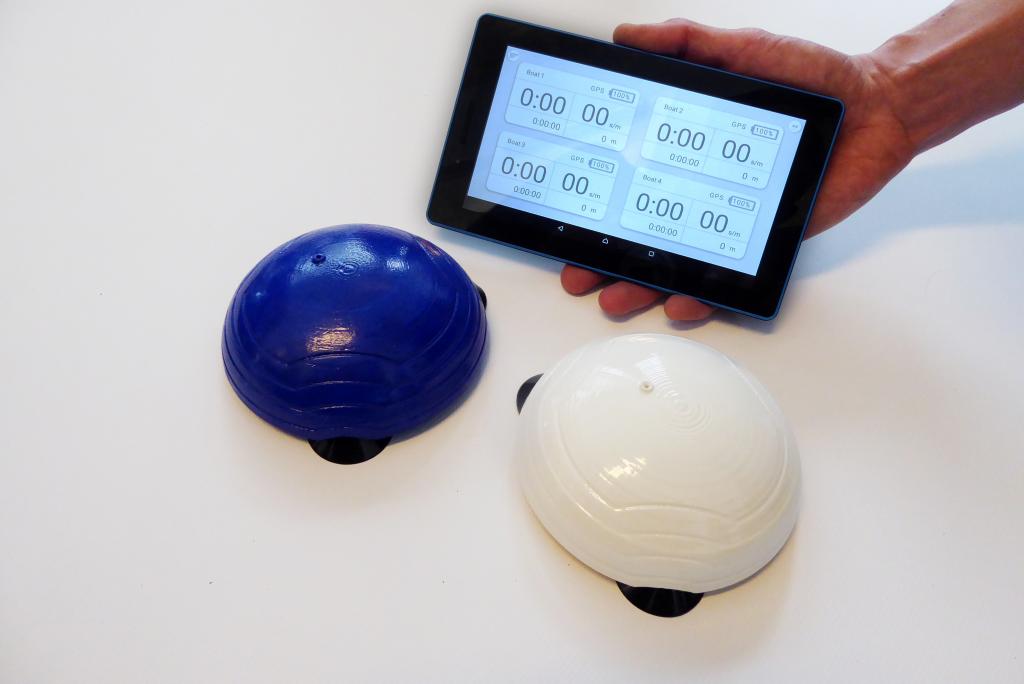 Prototype trackers and tablet of the Row4 system (Photo: JW)

The first batch of twenty-five trackers is in production in China. Zwetsloot and Besamusca regard these as the first test series. Four units will be shipped to the Dutch rowing association KNRB, and the rest to the student rowing clubs Laga and Nereus. At the KNRB, embedded sport scientists from the Free University Amsterdam will be involved in the tests. Their feedback will be used to improve the product for the first mass series. Meanwhile requests for information have been coming in from Spain, United States and Australia.

Logging rowing outings on a tablet has the immediate benefit of storing a crew‘s performance and comparison with other crews or with other crew compositions. That’s where big data comes in. RowCoaching is developing an online database for rowing data, fittingly called OARS (Online Analysis and Record System).

Otis Insight has plenty of ideas for expanding the Row4 technology. One of the first extensions will be a six-channel unit that can monitor an entire field during a race. Next are other water sports such as sailing (monitoring a complete regatta) in collaboration with the Sailing Innovation Centre in The Hague, canoeing, and monitoring kite-surfers who always want to know how high and far they have jumped. So, it seems there's plenty of room for expansion on the water, and little competition on the horizon.