Bread delivery without contact. It is possible in Delft. (Photo: Roos van Tongeren)

Bread, beer and three course dinners. These Delft entrepreneurs are not giving up and are instead delivering their goods to the door. Nice, but ‘this must not take too long’.

“We heard the news about all restaurant and bars having to close last Sunday and I had to call the last round immediately,” says Marijke Vuik of the Doerak, the craft beer café. “I saw it coming and had a Plan B. But I didn’t expect the closure to be so fast.”
Vuik is one of the many hospitality entrepreneurs that had to close their doors on Sunday. “By chance we had already planned a staff meeting that evening. We had thought of giving our regular guests a beer, a one or two litre growler. We also gave them a tray and glass. That initiative was so well received that we decided to do this for other people, but then without the glass and tray.” 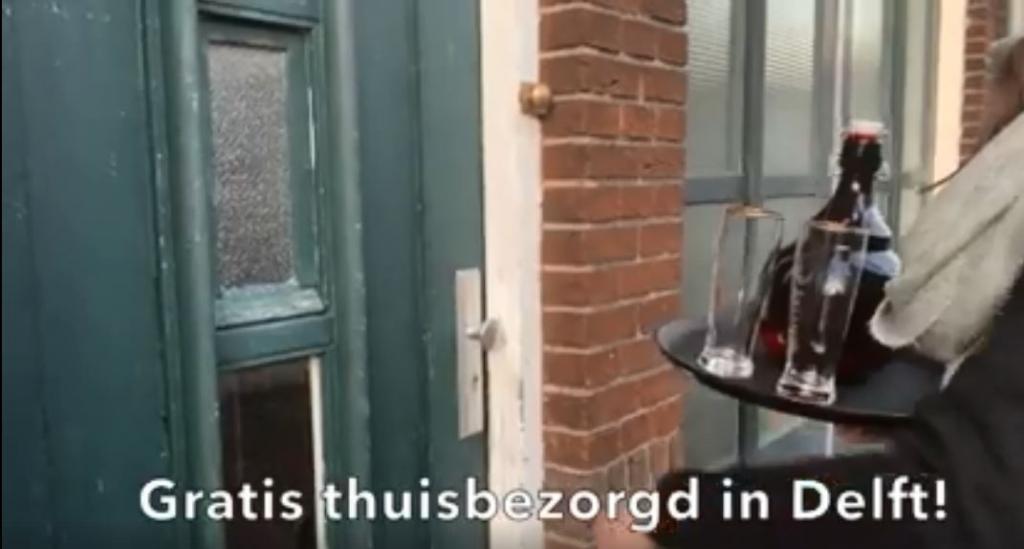 Still from a Doerak video.

The growlers can be ordered through Facebook, WhatsApp and email. There is a choice of over 30 craft beers. “It’s going a lot better than we expected,” says Vuik, “the orders are coming in quickly. We already had 20 after being online for just an hour. We may not reach our usual turnover, but at least we still have something to do.”

Contactless bread
Another action that is being picked up by social media is that of Baker Jaap and Baker Van Roon. They deliver bread to the door, completely contactless. Ordering and paying is done through WhatsApp and Tikkie. “I saw that there was a demand for bread delivery in my immediate area,” says Martin Rietvelt of Bakker Jaap. “I phoned Van Roon and we thought up this plan. We literally divided Delft into two – he does one half and I do the other. It was about four hours from the initial idea to being online.” 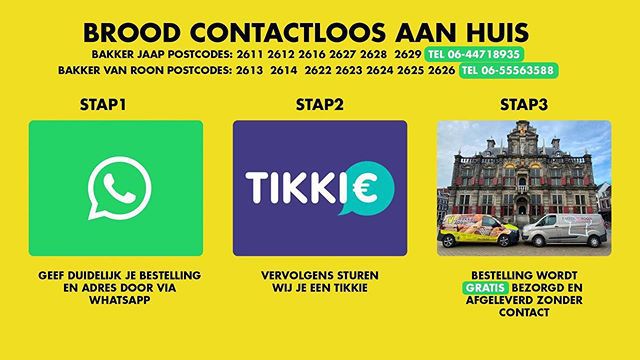 The day after an order is received, the delivery man hangs a bag of bread on the door or places it on the doorstep. He rings the bell and, from a distance, checks that the delivery is picked up. “We are receiving only positive responses,” says Rietvelt. “The service has been shared 110 times. We had never thought it would be this popular. We thought of it for sick and vulnerable people, but actually, it’s useful for the rest of the neighbourhood too. We already have 25 orders for tomorrow.”
And in the meantime, the bakery is just as busy as usual. “We have a higher turnover than usual. There are no more tourists, but people who cannot find bread in the supermarket now come to us. We don’t know how long this will last. We will either be extremely busy, or we will have to close. In any case, we have stocked up on our ingredients. Fortunately flour doesn’t go off quickly.”

Chique dining is still an option
So, beer and bread are arranged. But what if you want to celebrate by going out for dinner? Robert Polman of the Le Vieux Jean restaurant has a solution. He delivers three course dinners to your house. 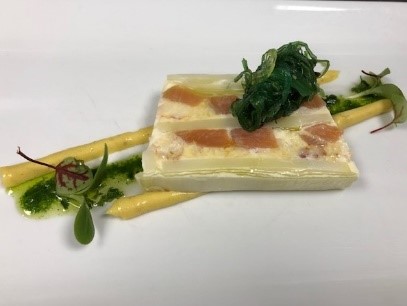 “Last week everyone was cancelling and there were few reservations. We thought we would have to close, but when the announcement came on Sunday, we were still in shock,” says Polman. “We informed our staff and put some menus together for home delivery. We have been doing this at Christmas for 20 years already.”
The menu arrives at the house as a package. It contains detailed instructions on how to prepare the dishes and how to arrange the plates. “Each dish takes less than 10 minutes kitchen time to prepare,” promises Polman.

Uncertain future
They are happy to keep working and to get some turnover, but the entrepreneurs will not make much of a profit. Are they afraid of going bankrupt? “We are just as worried as the rest of the Netherlands,” says Vuik. “It is clear that it will be tough. Everyone’s income will drop. We are keen to hear what the Government will do.” “We have been here for so long and own the premises. We also live carefully,” says Polman, “but our wallets are not infinite. This must not last too long.”