Current students to benefit a little from basic student grant

The basic grant will not only become available for new students. (Photo: Justyna Botor)

The basic student grant is due to make its comeback from September 2023. Are you still studying and on schedule to graduate? In that case, you will share in the grant too.

If the government gets its way, students living at home will soon receive a basic grant of 91 euros a month. Students living away from home will be entitled to 255 euros. These amounts were leaked to the press this week. The basic grant will not only be made available to new students, “but also to students who have already started their studies”. In order to qualify, they must be on schedule to graduate on time.

For example, as a student who started a four-year programme this year, you will be entitled to a basic grant for two years starting from September 2023. The aim is to ensure a smooth transition between the old system and the new.

And when you graduate in a few years’ time, you can also expect to receive an allowance for the time you studied without a basic student grant (see below).

RepaymentEducation Minister Robbert Dijkgraaf has decided to share his considerations with the House of Representatives and outline some of the dilemmas. The budget for the new basic student grant is limited to one billion euros per year. That amount has to cover all the measures and changes he plans to introduce.

Surprisingly, there are students who do not apply for an additional student grant even though they are entitled to it. Even more surprisingly 41 percent of this group have taken out a student loan, which of course means that they are needlessly missing out. The minister hopes to address this issue by providing additional information. That too will cost money.

Preferred planUltimately, Dijkgraaf wants to use his budget of one billion euros to finance a basic student grant plus some additional measures. But what if the House of Representatives has a different preference? He has set out three alternatives in a chart that details how they will affect the basic grant by a few tens more or less per month. 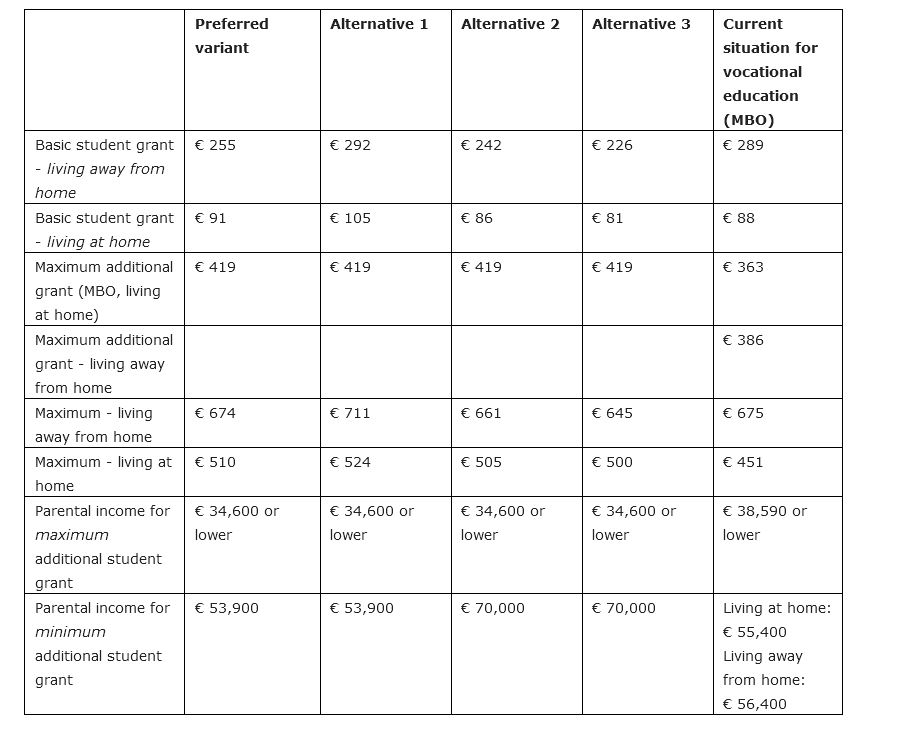 But what about the cohort of students who do not benefit from the new loan system? The minister plans to give anyone who has studied for at least one year under the loan system without a basic student grant an allowance of 359 euros per year, up to a maximum of 1,436 euros (the equivalent of four academic years). However, to qualify you have to make sure you complete your degree within ten years.

The first four cohorts (2015-2019) under the student loan system were also due to receive a study voucher worth 2,150 euros to spend on additional education. The coalition parties initially wanted to amend that plan in favour of letting students choose between additional education or a reduction in their student debt.

But the complexity of realising this option has led the government to abandon the voucher scheme and go for a student debt reduction instead. Debt-free students will have the money credited directly to their bank account from 2025. However, this change has resulted in a lower amount.

The previous government had set aside 600 million euros for the voucher scheme in the knowledge that not all students would end up making use of the vouchers. Many graduates have no desire to pursue additional education, after all. But a pay-out is bound to appeal to all students and, with that in mind, the amount available has been lowered to 1,770 euros.

If the House of Representatives agrees, the first four cohorts of students who missed out on the grant can expect to receive up to 3,206 euros.

What about next year?Many young people may decide to take a gap year from September 2022 with a view to receiving the maximum benefit of the grant when they return. This could lead to a dip in new student enrolment. But Dijkgraaf has anticipated this possibility too: some extra funds from the allowance pot could be reserved for these new students. However, he went on to warn that this would be “at the expense of a large part of the budget for students from other years, given that the total budget remains set at one billion euros.”

DisappointmentThe initial response by the Dutch National Students’ Association (ISO) is one of disappointment. On the basic student grant, president Lisanne de Roos says: “An amount of 91 euros for students living at home isn’t even enough to cover the tuition fees, and an away-from-home grant of 255 euros only leaves 44 euros a month to spend on groceries or rent once tuition has been paid for. Students will certainly benefit financially, but the proposed basic grant will do nothing to alleviate their problems and concerns. The notion that we could look forward to a fully-fledged basic grant has turned out to be a miscalculation.”

She also finds it odd that students who were due to receive 2,150 euros under a voucher scheme will now have to make do with 1,770 euros – hundreds of euros less – because everyone is expected to make use of the cash allowance scheme. The ISO insists that the compensation available to students who missed out on the grant is much too low in any case.

In the coming academic year, university students from Ukraine will pay the same fees as Dutch students. “Clarity is essential for prospective students who fled Ukraine.”
Education