Counting down to 1 June. Where have all the new students gone?

Universities and universities of applied sciences are working hard on preparing for the next academic year. It seems unavoidable that part of the teaching will be online and the rest at one-and-a-half metres. But is this what new students want?

This week some institutions announced substantially lower registration figures than last year. At the Association of Universities in the Netherlands (VSNU), the counter on 11 May was 91,000 new bachelor students, or 2.5% fewer than in the same calendar week last year. Some are outliers: The University of Wageningen, for example, has 12% fewer registrations for bachelor degrees, says Resource, the University newspaper. At the Rotterdam University of Applied Sciences, the number of weighted registrations on 4 May was even 23.8% lower than at the same time in 2019, reports Profielen. At TU Delft the number of registrations is 4% lower than last year. 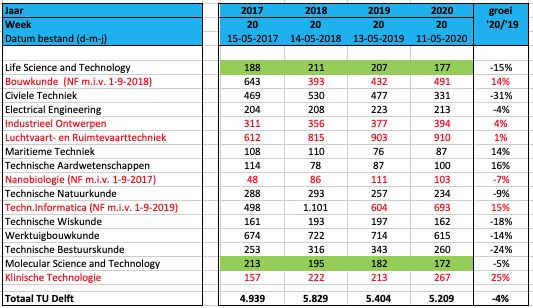 The numbers for BSc studies at the TU Delft. (Source: Managementinformation OS)

Deadline
Given the coronavirus situation, the deadline for registering this year has been pushed back by one month from 1 May to 1 June. But comparing this year’s figures with those of exactly one year ago is like comparing apples to oranges, says Eva Kloosterman, spokesperson of The Netherlands Association of Universities of Applied Sciences. “It would be more logical to compare the current numbers to the numbers of mid-April last year, two weeks before the registration deadline.”
The VSNU too says that it is still too soon the registrations are proceeding in a completely different way than in previous years,” says spokesperson Bart Pierik. “This makes it difficult to really tell. Are there really fewer registrations or is it the 1 June effect?” The figures also fluctuate. Last week, the universities were still 3.9% down.

Uncertainty principle
For now, everything is still up in the air and we have to wait for the last minute registrations. Dutch pupils who had planned a gap year this year may change their plans. Before the corona crisis, a record number of students went backpacking or worked for a year. But now this is not as much of an attractive option as before. This may still generate a lot of registrations.
So the question is whether the international students who have registered will really turn up. Nuffic, the internationalisation organisation, was bleak about this at the beginning of April.

Doing a PhD during corona: doing research at your parents-in-law’s house

Doctoral candidates and postdocs are raising the alarm because their research is being delayed by the corona crisis. These are some of the problems they are facing.
Education

TU Delft postdocs and doctoral candidates are getting into difficulties. The corona measures are causing delays which they say they cannot always make up.