Closing schools, working at home, and no social events. What is the effect of such measures, and why do they differ across countries? How science advises policy makers.

The recipe against the corona outbreak shows remarkable similarities all over the world. Closing schools and universities, working from home, and postponing or cancelling social events are pretty standard measures. And yet, there are differences, says Dr Amineh Ghorbani (Faculty TPM). “An extreme quarantine like in China wouldn’t be accepted in the Netherlands.”
That’s why Prime Minister Mark Rutte came up with the ‘intelligent lockdown’ in which people use their own sense of responsibility to remain at home as much as humanly possible. “In Iran, people didn’t hoard toilet paper,” Ghorbani adds, “because they don’t worry about shop supplies.” Ghorbani did her PhD in agent-based modelling under the supervision of Professor Virginia Dignum, who has left TU Delft for Umeå University in Sweden.

Identity in numbers
It may seem strange, but national identities can be expressed in numbers. The Dutch social psychologist Geert Hofstede (1928-2020) did so in the early 1970s on the basis of a worldwide survey of employee values at IBM, where he worked at the time. Hofstede’s cultural dimensions theory, as it became known, expressed the relative value of individualism; collectivism; uncertainty avoidance; power distance; and masculinity and femininity in numbers from 0 to 100. He later added two more dimensions. It is Ghorbani’s task to add these national cultural characteristics to a computer model called Agent-based Social Simulation of the Coronavirus Crisis, or ASSOCC for short.

Virtual people
ASSOCC is the remarkable initiative of Professor Frank Dignum at Umeå University (and husband of Virginia Dignum). There is no funding for the programme, and yet 20 researchers with expertise in computer science, artificial intelligence, and mathematical modelling have joined forces through online collaboration.
Their goal: to contribute to a better understanding of the effects of the coronavirus pandemic on people, societies and the economy in the short and long term. They are doing this using a technique called agent-based modelling, which is in fact the simulation of a population’s response to certain measures. ‘Our simulation model is based on a set of artificial individuals, each with given needs, demographic characteristics, and attitudes towards regulations and risks’, the researchers explain on their website. ‘By having all these agents decide each time what they should be doing, we can analyse many different possible effects of policies, such as total lockdown or voluntary isolation.’ 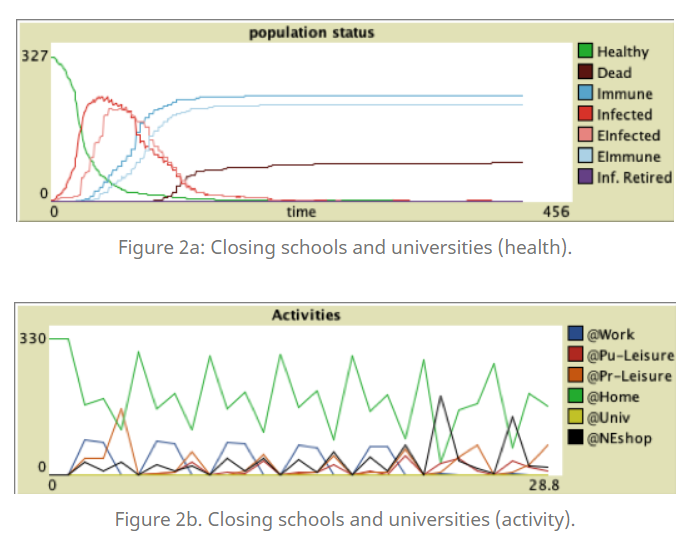 Spring effect
Let’s take an example. What is the effect of school and university closure on public health? There are more people at home (green line, bottom graph) during the day because of the closure. The yellow line (@university) is down to zero. So far, so good. But what is the effect on public health? The number of infected people (red line, top graph) is 215, which is higher than in the normal case without closure (200).
How come it is the other way round? We see people going to non-essential shops (black line, bottom graph), say the researchers, with peaks at the weekend. Conclusion? Without further measures like social distancing and closing of restaurants, the effect of working at home or closing schools is surpassed by the side effect of people desperately wanting to go out. Other examples can be found on the ASSOCC website.

Consulting governments
Are governments interested in testing the effect of a policy measure before implementing it? Team leader Frank Dignum writes: ‘We have concrete contacts with the advisory groups for the British, Swedish and Italian Governments. The exact form in which the platform will be used is a topic for meetings later today and with government officials of those countries at the beginning of next week. The Dutch government might follow next week.’
Alexander Melchior, ASSOCC team member at the Department of Information and Computing Sciences at Utrecht University, confirms that contacts have been with policy makers in The Hague. “In others countries, processes have been quicker. But we’d like to expand our collaborations with the Dutch government as well.”

There is an app The output of agent-based modelling improves with better input. That’s why the researchers have developed a reporting app that Swedish citizens may use to report on their daily movements and overall situation. There are no trackers or sensors involved - only the voluntary filling in of a form. By doing so, researchers will get a better idea of the effects of the coronavirus containment policies. In return, app-users will get the latest information on the development of the corona crisis. The app is still in development, and it also awaits approval from the Swedish national ethics research board.
Asked if the app can be used elsewhere, Dignum writes: ‘No, it cannot be used outside Sweden. We need ethical approval for using it. That is done nationally. We are still waiting for that to happen. The modelling has to be done per country anyway, because of the differences per country on all kinds of aspects in daily life. This means that data has to be interpreted differently in different countries. We are in close contact with the kind of RIVM of Sweden and see if we can combine things. They are again connected to the health organizations in other European countries. So, we could potentially use that network to roll it out Europe-wide.’