Commotion in Leiden does not spread to TU Delft’s opening

While scientists and students in Leiden protested against the Cabinet’s policy, the opening of the academic year at TU Delft remained quiet.

At TU Delft, there was no politics on the agenda on Monday 2 September, only sports. As a sporting gesture, students handed out sweatbands at the entrance to the Auditorium, where the opening of the academic year was held. Vice Rector Magnificus Rob Mudde was even accompanied to the stage by a ‘lost’ tennis ball.

In his speech, Mudde drew parallels between the professional footballer Cristiano Ronaldo and TU Delft students. Ronaldo stands out because of training and dedication. The same goes for students, he told the students. “You all have talent, but you need to put in the training hours to use your talent to the full.” He did not mention the lack of investment in higher education, the cutbacks and the increasing workload against which hundreds of students and university employees are protesting. 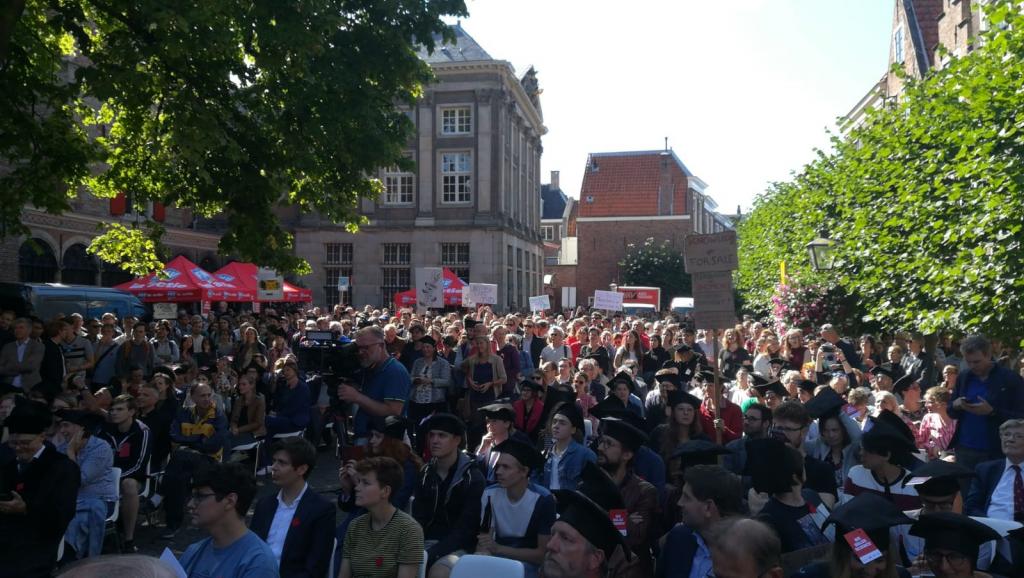 ‘Real opening of the 2019 academic year’ on the square in front of the Pieterskerk in Leiden. (Photo: HOP)

Red squares
A crowd of enthusiastic protesters gathered around Bod, some of whom had come in their university gowns. The police estimated that there were about 750 protesters. They applauded loudly and shouted ‘boo!’ at the right moment. Many had pinned the red squares that were handed out to their clothes. There were also berets for the protesters. The university staff carried protest boards with slogans such as ‘The next step is to strike’ and ‘Universities ≠ hobby for the left’.

After Rens Bod’s speech, Professor Ingrid Robeyns from Utrecht University warned that the political battle was not over by far. Social history shows that you can only change things by cooperating, she emphasised. “We are not going to stop.”

Criticism
At TU Delft things continued as usual. After a keynote by the Ghanaian Olympian, Akwasi Frimpong, four top athletes came on stage. Facilitated by a quiz master and Rector Magnificus Tim van der Hagen, they answered questions while cycling as far and as fast as they could. Van der Hagen did not mention the Cabinet’s proposed plans. 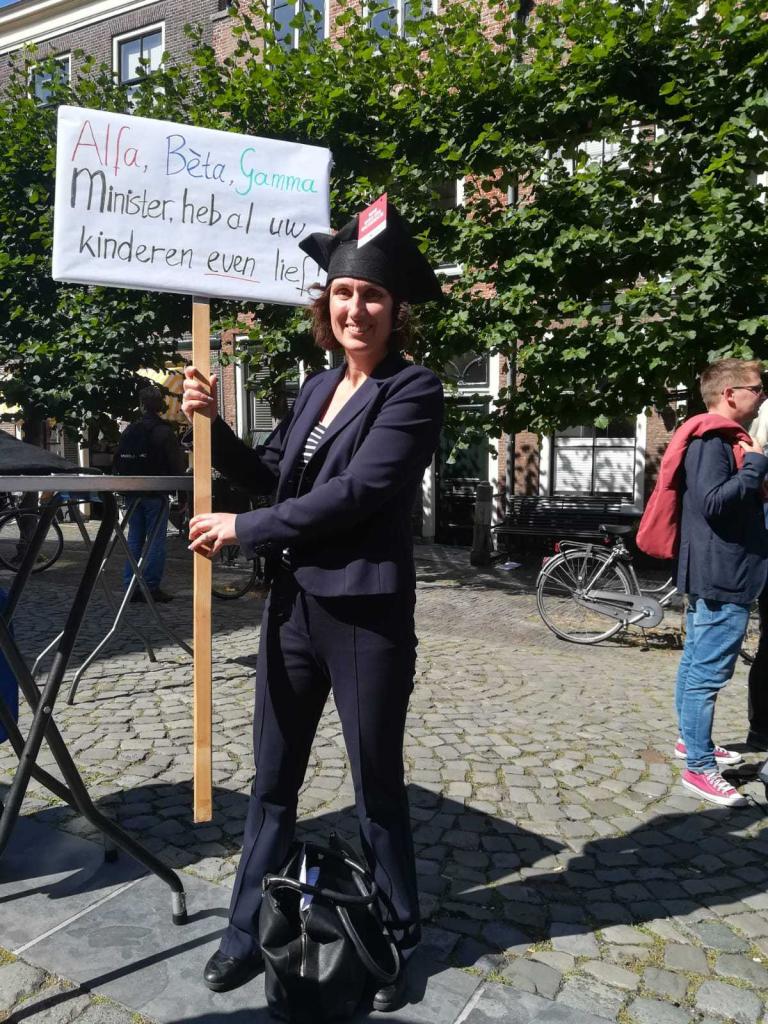 His colleague from Leiden University, Carel Stolker, was explicit. Earlier in the day he strongly criticised the Minister of Education, Ingrid van Engelshoven. He called her policy ‘disastrous’ and could not remember when the relationship between politics and universities was this bad. That Van Engelshoven was Leiden University’s guest during the official opening of Leiden University’s academic year did not hold him back from his vociferous criticism.

Understanding
The Minister showed understanding for all the anger and hinted that the Cabinet will make a conciliatory gesture on Prinjesdag, the official opening of Parliament for the year. This message was received with much scepticism by the protesters.

Pension fund ABP will no longer invest in fossil fuels. Over the next one-and-a-half years it will sell all its shares in fossil fuel producers.
Campus

Rob Mudde: ‘We need to be more alert on diversity and inclusion’

Vice Rector Magnificus Rob Mudde too believes that TU Delft should be more diverse and inclusive. But how? ‘Hard quota will not bring us any further.’