Climate files: drought in the Netherlands

Dry summers are no longer incidental, but a pattern. TU Delft researchers are working on solutions for the increasingly acute drought. A dossier with six parts. 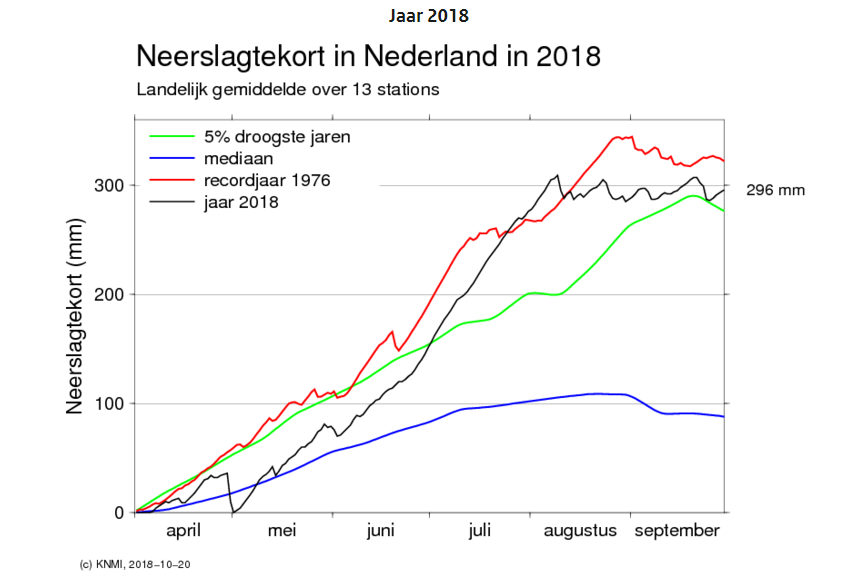 Precipitation deficit in The Netherlands in 2018

Climate simulations by the Royal Netherlands Meteorological Institute (KNMI) show that in the coming decades it will become drier in Southern Europe and wetter in Northern Europe. So much is certain. The Netherlands is just on the border. It could tip in either direction. But the research, like the weather pattern, points slightly more in the direction of drought. Delta listed the consequences and expectations of increasing desiccation in And now for the weather forecast: more sunshine and evaporation.

Drought comes in different flavours. A lack of precipitation is the primary cause that, over time, can lead to soil drying out and damage to crops and nature. The next stage is the depletion of ground and surface water, also called hydrological drought. It can cause damage to nature and infrastructure. Think of ground subsidence that may cause gas pipelines to collapse. This is the prelude to the next phase: the socio-economic drought that manifests itself in all kinds of human discomfort and economic damage. Because precipitation deficit does not take these differences into account, hydrologists are working on a new, universal drought index: SPI. Read about it in The best way to measure drought.

Vegetation and water buffers can reduce the impact of drought and heat in cities. TU Delft researchers are working on optimising this. Others are mapping the damage that drought causes to buildings’ foundations. Read and watch four examples in Drought in the city.

Soil subsidence in peat meadow areas is between 0 and 2 centimetres per year and has been going on for about 800 years, explains Professor Ramon Hanssen. But persistent drought lowers the groundwater level and exposes a thicker layer of soil to desiccation and shrinkage. Read how the drought of recent summers has increased the conflict of interests between nature and agriculture in: Will cows still be able to graze outdoors?.

We have learned to deal with flooding in the built environment, says hydrologist Dr Frans van de Ven (Faculty of CEG and Deltares), but we have less experience with drought. The effects of drought on subsidence, water quality and foundations only came to light years later. There are still plenty of research questions, the hydrologist says in View of Frans van de Ven.