At the opening of the academic year, dozens of demonstrators cycled from city to city to protest against temporary contracts. Delta spotted a group at TU Delft.

The bicycle protest, organised by the FNV trade union in collaboration with the Algemene Onderwijsbond (AOb, General Union of Educational Personnel) and the WOinActie (higher education in action), took demonstrators through various university cities. They cycled from Amsterdam to Utrecht, Nijmegen to Wageningen, Leiden to Delft and Rotterdam, and did a circular route around Groningen.

Boersma waits for the group that got on their bikes at 10:30 this morning in Leiden. They are somewhat delayed because of a flat tyre and a detour around the Ministry of Education. “But it’s going well. They’re on the way.” 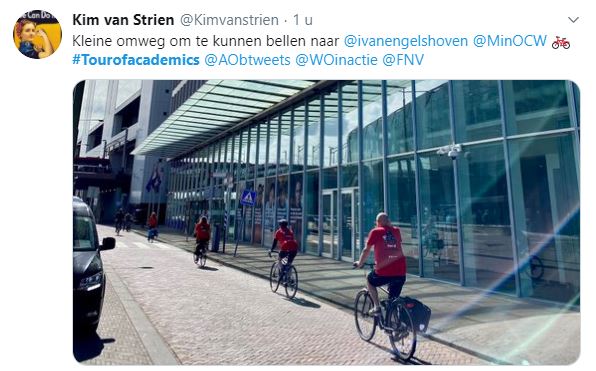 The detour around the Ministry of Education.

A little later, Thijs Porck shows up. He lost the Leiden group when he decided to quickly go home to get a jacket. Porck is cycling in the demonstration to support his colleagues on temporary contracts. He himself has a permanent position at Leiden University, but getting it was not a smooth process. “I got the appointment after eight years and after having left twice for six months and one day.” He calls the temporary contracts a “waste of capital”. “WOinActie member Remco Breuker summarised it well this morning when he said that if the work is a structural part of the institution, the appointment of the people who do that work also should be.”

‘Will I have a job next semester? And next year?’

He speaks from experience and sees the degree of insecurity that temporary contracts bring around him. “People wonder if they have a job next semester. And what about the year after that? Many academics stay because they love their profession and stay for their students. But it is strange, isn’t it, if skilled teachers with three years of experience are exchanged for new temporary people with no experience?”

Tenure track
One example of a temporary contract is the tenure track position. Within five years, researchers are supposed to demonstrate that they are good enough for a place on the permanent scientific staff body of the university. “It is the selection of the strongest. Tenure trackers have an incredible workload,” explains another demonstrator who prefers to remain anonymous. “This is not a fruitful way to train people.”

Boersma nods. “Forty percent (60% including doctoral candidates) of all the scientific staff have temporary contracts.” The CAO (general labour agreement) of 2015 state that the number of temporary positions of four years or less must be reduced to 22%. That objective has been achieved nationwide, but the share of teachers is still far too high." 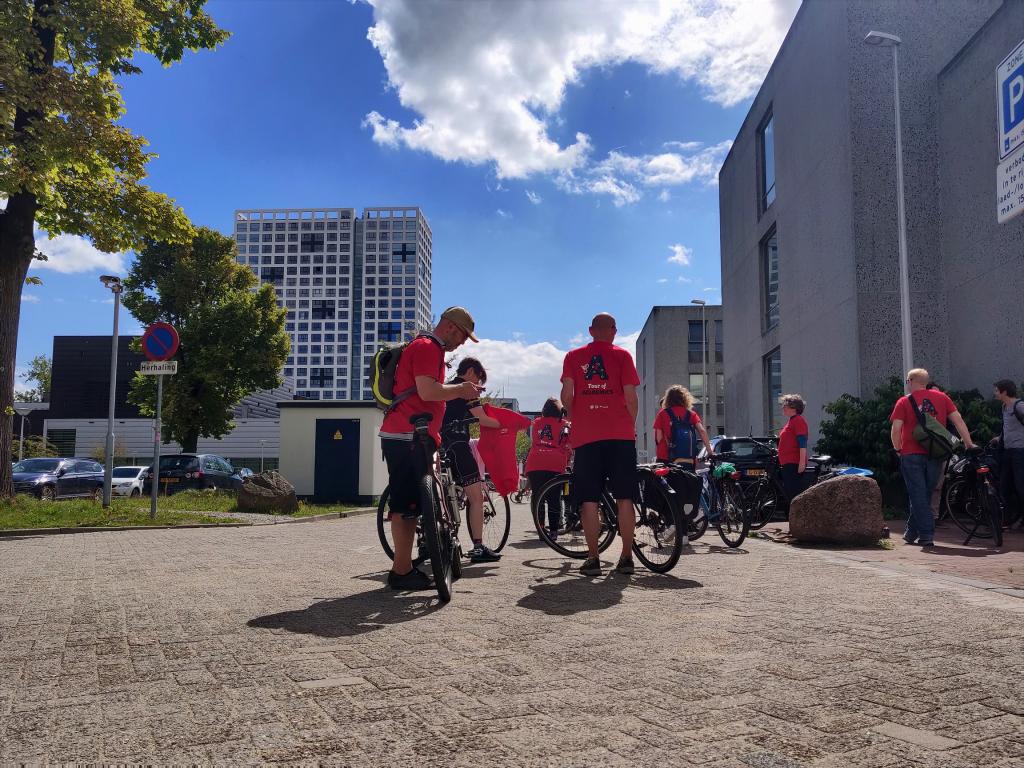 Protesters get ready for the ride to Rotterdam.

Will the cycling protest achieve anything immediately? Porck smiles. “Media attention at least. That’s the main thing.” Boersma does say that there has been some success though. “This morning, both the Association of Universities in the Netherlands (VSNU) and Minister Van Engelshoven of Education said that they share our objectives.” But he does not expect that their statements will directly lead to the allocation of the required investment of EUR 1.5 billion. “But realisation is making inroads, even in the universities. They need to deal with the process. Negotiations for a new CAO are looming and you can count on this point being high on the agenda.”

Departing supervisor: ‘What has already been done, is less interesting to me’

Architecture alumna Laetitia Smits van Oyen was a member of the TU Delft Supervisory Board for eight years. How does she look back? An interview with the woman of wild ideas.
Campus

The Dutch government wants to introduce a night curfew that applies until 9 February. The House of Representatives has to agree before the curfew can be introduced.
Campus

Students: more drug use and financial worries due to Covid

Nearly one in three students experience financial worries during the coronavirus crisis, a survey conducted among 1,250 students reveals. Substance abuse is also on the rise.