Posters at the Faculty of Industrial Design Engineering. Another design may be seen at the Dutch Design Week. (Photo: Yujie Shan)

A group of Asian students at TU Delft is using design to raise awareness on wearing masks as a protection against the coronavirus. They are also urging Asians to speak up.

For the second time in a few weeks, the students hung their interactive posters on the walls of their faculty, Industrial Design Engineering. On one of the posters people can vote on whether they would wear a mask and why. Another poster has stickers such as ‘Just a precaution. No big deal’, ‘Such a strong wind, isn’t it’ and ‘Take it easy’. 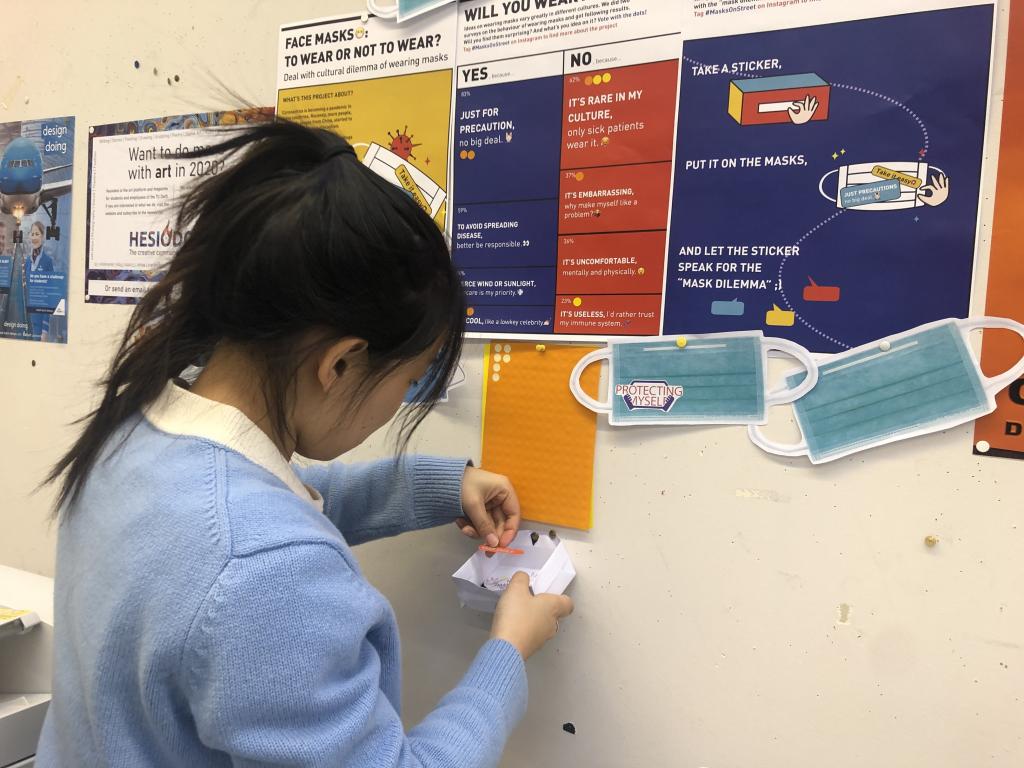 That works both ways. “Chinese and other Asian people must realise that they are in Europe. They should adapt to the culture and not wear masks unnecessarily,” says Bingyan Ding. People could needlessly panic if they see someone wearing a mask. “Asians wear masks mainly to protect themselves, not because they’re sick,” Yujie Shan explains. “They sometimes also wear masks against the sun and wind, to cover their faces when they’re not wearing make-up or as a fashion statement,” Xingyu Fan adds.

The posters are not the only way the students are using design to help raise awareness and combat discrimination. The students gave a presentation during a cultural awareness course at their faculty and have done role plays with other participants.

Role playing: how do others react to someone wearing a mask? (Photo: Rong Wan)

It made the students decide to go out on the streets of Delft and The Hague wearing masks to observe people’s reactions and question them about it. “We wanted to confront them,” Yujie Shan says, “but we only met really nice people.”

That is sometimes different. When Chia-Ling Yeh and her Taiwanese boyfriend went to Maastricht by train a few weeks ago they had a confrontation with a Dutch lady. “My boyfriend coughed and the lady asked: ‘why don’t you wear a mask?’. We tried to explain he’s not from China and I haven’t been there since the coronavirus outbreak, but she went to sit somewhere else anyway. It made me angry that she didn’t trust us.” Bingyan Ding was called at aggressively on the street in Delft. “I didn’t understand what the man was saying, but it made me feel insecure.”

These and other examples of discrimination in the Netherlands and worldwide made the students realise there is more work to be done, especially in educating Asians. Bingyan Ding: “They are brought up to be quiet and modest. We want to encourage them to step out of their comfort zones and speak up more.”

The students are thinking of using interactive storytelling to design a Virtual Reality role playing game. Asians could use it to find out what would happen if they spoke up. People with other backgrounds could use it to feel what it is like to be Asian. The students want to take this game to the Dutch Design Week next October. Yujie Shan: “We don’t want sympathy, we want to design smart ways to strengthen the community.”

The COA wants to extend and prolong the shelter for asylum seekers at the TU Delft campus. The Municipality is prepared to look into this and has already approached TU Delft.
Campus