Students work on the fuselage of their hydrogen-powered drone. (Photo: AeroDelft)

The pioneering AeroDelft student team have presented its hydrogen-powered aircraft prototype on Friday 26 February. "Hydrogen is the only sustainable future for aviation."

The hefty drone, Phoenix PT, that the Aerodelft student team have presented on Friday is a milestone and a statement. This summer, the electric motor glider with a six metre wingspan will fly on liquid hydrogen - the only serious CO2-free alternative to big aviation, say the AeroDelft students. No other CO2-free energy carrier (*) offers a comparable energy density (one kilogram for seven hours of flight).

For Structural Engineer Karel Brans (master student IDE), the Phoenix PT is the culmination of three years of work. At the time, students noted that there was not much progress in making aviation more sustainable. If large companies were already working on it, it was behind closed doors. They decided to form a collective to accelerate the greening of aviation. They took a 1:3 model of an existing aeroplane and started to equip it with electric propulsion using liquid hydrogen.

The AeroDelft team grew to 44 students from various backgrounds from TU Delft, Erasmus University Rotterdam, Utrecht University, InHolland Delft, The Hague University of Applied Sciences, VU University Amsterdam and the Willem de Kooning Academy. Over half of them study aerospace engineering, the rest follow other technical or management studies. The team has 17 nationalities.

Team manager Jan Willem van Zwieten (IDE master student) sees advantages in such a mixed group: it forces technology students to explain the technology better and the reasons why they choose it. That is an extra learning aspect for them. 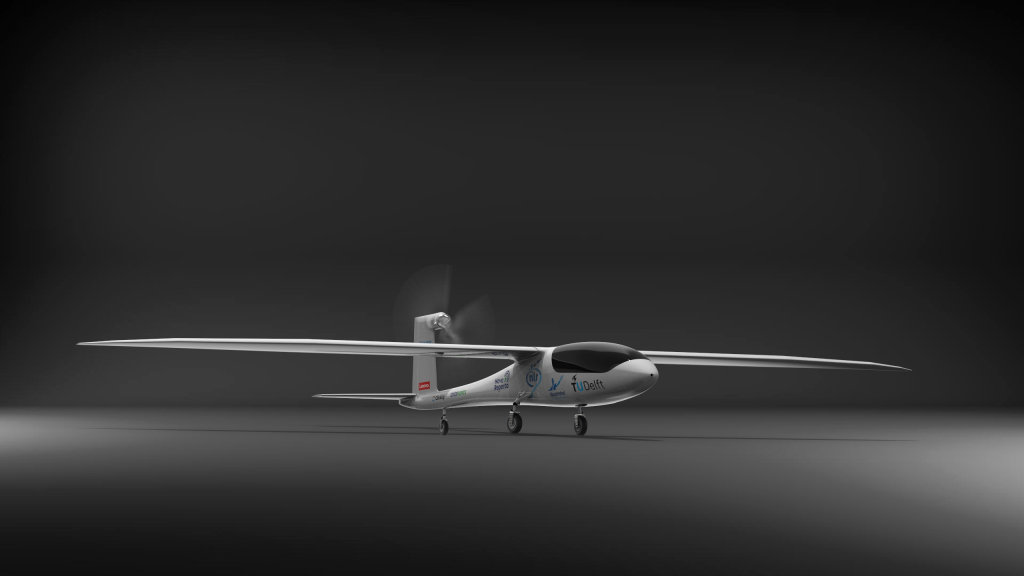 The aircraft that was shown on Friday, the Phoenix prototype, cannot fly yet. That will follow in stages in the spring. For the first flights, the electric drive will be powered by batteries. This will be followed by a pressurised hydrogen fuel cell. Only as a last step will the students use liquid hydrogen.

Liquid HydrogenWhile liquid hydrogen only exists at temperatures of -253 degrees Celsius or colder, the operating pressure is low (1-4 bar). The alternative is storing hydrogen in high pressure cylinders (300-500 bar). The team chose liquid hydrogen because of its higher energy density, and the lighter vacuum tank - an advanced thermos flask.

However, this also created problems for them. Liquid hydrogen must be heated before use in the fuel cell. Where does the heat come from and how do you prevent the supply from suddenly freezing?

Hydrogen is not an easy fuel. “Imagine what would happen if you were standing on hot tarmac with a fully fuelled hydrogen plane,” says Jan Willem. “Your fuel would evaporate while you were waiting.”

And where does that evaporating hydrogen go? To the top of the plane. So good ventilation will be needed to prevent the concentration of hydrogen there from becoming high enough to ignite.

There are still plenty of obstacles on the way to flying on hydrogen, but team AeroDelft is already taking the first step. After a drone running on liquid hydrogen, the next project is to make a small sports plane more sustainable.

(*) Hydrogen is as CO2-free as the way it is made. 99% is produced from methane (grey hydrogen). Hydrogen from electrolysis with green electricity is CO2-free, but very rare. Aerodelft concentrates on hydrogen technology and uses the grey hydrogen available on campus.

Best graduate: 'Everything is so much easier when it’s fun'

Saskia van Heumen is the best graduating student of 2022. “My graduation project helps me know what I am capable of doing. I went into job applications with that in mind.”
Science