The following eight designs walk us through the history of the IDE degree programme. From the first graduation project, the Buxi, to the ANWB call box and one of the most recent designs, the Nudging toolkit.

The Industrial Design section started in 1962 in an attic room of the Faculty of Architecture, with two students and a few teachers. Thanks to engineer Joost Van der Grinten.

When he was appointed endowed professor, Van der Grinten vowed to set up an Industrial Design degree programme; Initially a specialisation within the Architecture department, on 7 February 1969 it was officially recognised by the minister.From that moment on, the degree programme was able to continue independently from the Architecture programme and the number of students increased rapidly. The degree programme relocated to Ezelsveldlaan and not long after that it celebrated its first graduate engineer, Norbert Roozenburg. 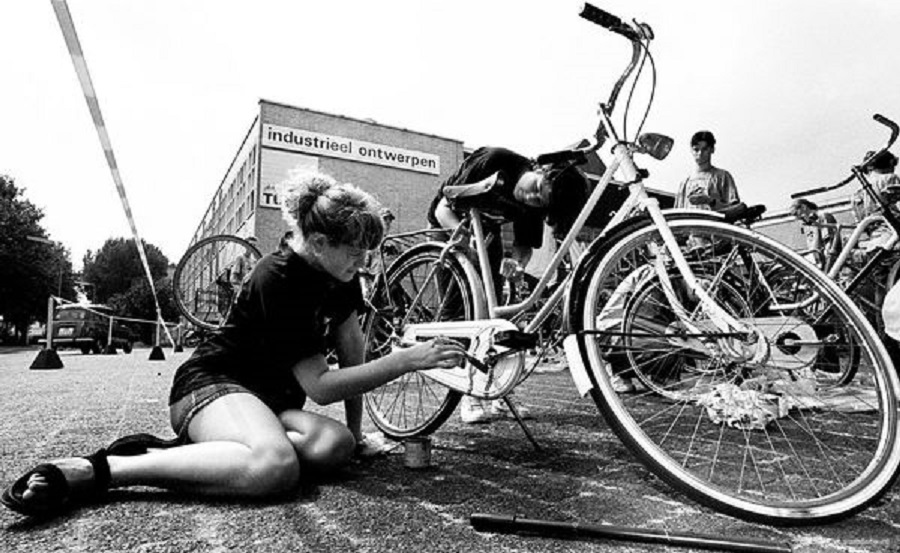 Over the last 50 years, IDE has developed into a broadly oriented programme enjoying international prestige with 1,964 students (2018). According to Dean Ena Voûte, the days of simply making beautiful chairs at the Faculty are long gone. “All productions are featuring more and more electronics and robotics.”

The following eight designs walk us through the history of the IDE degree programme. From the first graduation project, the Buxi, to the ANWB call box and one of the most recent designs, the Nudging toolkit.

Buxi - the first graduation project
The first person to graduate from the programme was Norbert Roozenburg in 1971. His graduation project was the buxi system: an on-demand minibus that would pick you up and take you to the central stop.

Roozenburg was asked to come up with a rough design for the minibus and to develop specified parts. He worked on this project with student Jacob Maartense, for whom this was his fourth-year design project. 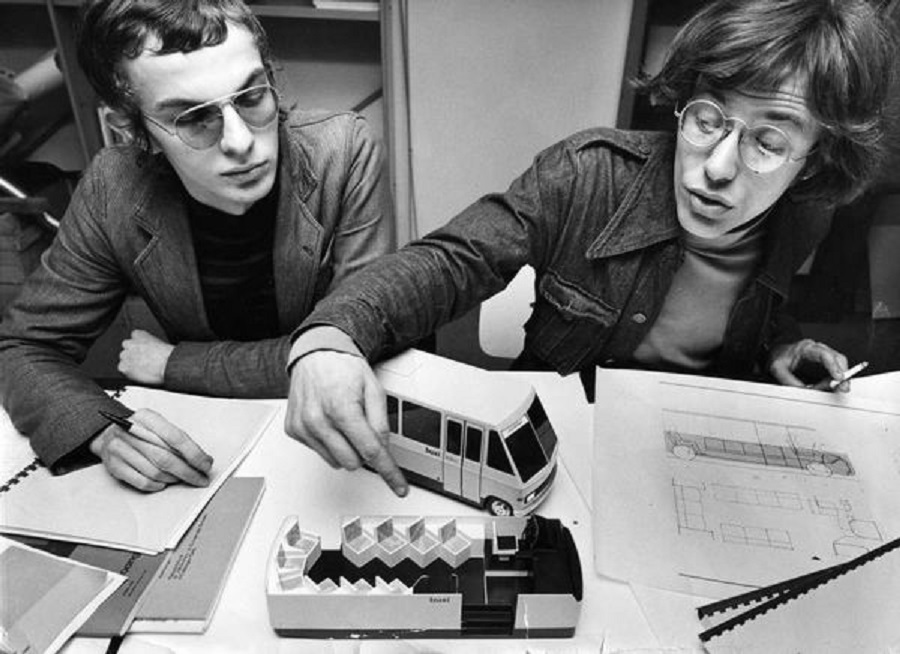 Once they had analysed the buxi system, they went on to develop the layout for the vehicle, paying particular attention to the behaviour, comfort and safety of both the passengers and the driver. At the same time, they examined the technical possibilities and requirements of the vehicle. Out of their five alternative layouts, they selected one to take to the next stage. Among the innovations was the diagonal arrangement of the seats.

ANWB callbox - an elegant guardian angel
Until last year, you could spot them every 2 kilometres along the side of the road: the ANWB call box. A dream to design as a graduate, says Chrétien Gerrits almost thirty years later. 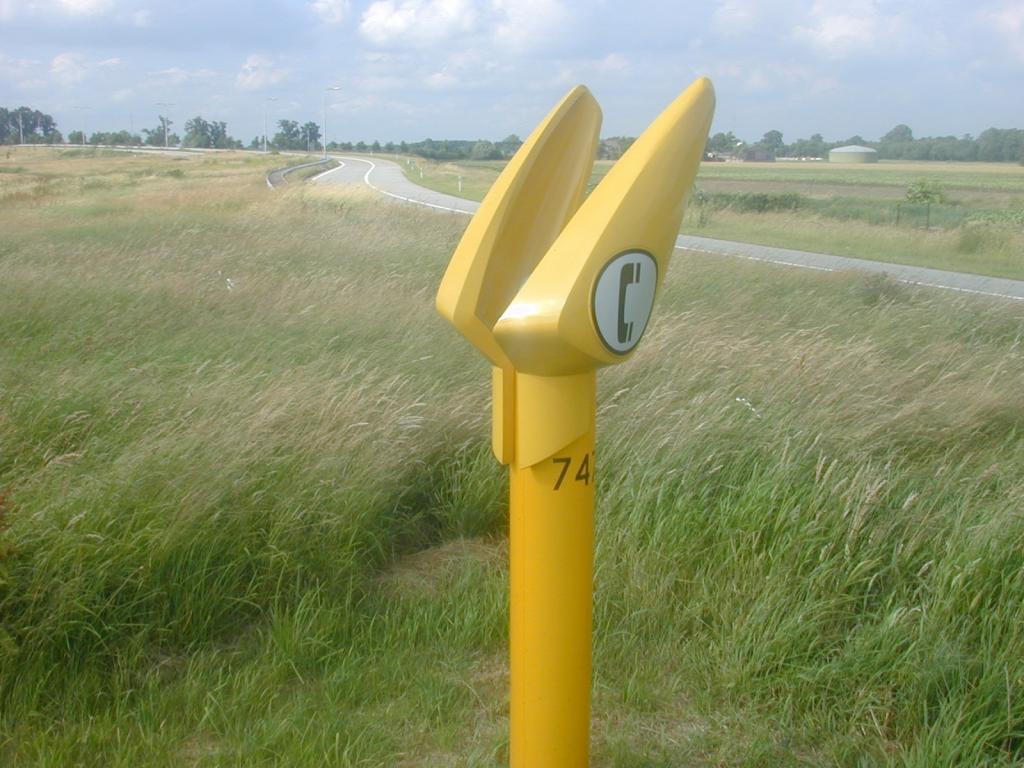 Gerrits’ task was to make the call box cheaper to produce and maintain. His research showed that the previous call box was too high for children and people in wheelchairs, yet they also had to be able to report breakdowns, accidents or emergencies.

They couldn’t reach the button, nor could they hear the ANWB employee above the noise of passing traffic.

"The problem was that you could not turn up the volume," says Gerrits. Thanks to its simplified design with ‘long ears’, everyone - the tall and the small - could hear the emergency services without the volume having to be increased. “It resulted in significant cost savings: 60% on production, 70% on maintenance," says Gerrits.

The designer is still passionate about his 1994 call box, which he affectionately calls ‘Brother Rabbit’. “The impact of the design was important to me: it was an elegant guardian angel on the border between tarmac and cows, between the hustle and bustle of progress and the silence and vulnerability of nature. It was always there for many unlucky travellers, in rain or shine, day or night, along a busy road or in the middle of nowhere.”

Delft Design Guide - a reference guide for students
The Delft Design Guide is the culmination of years of experience of design students, professionals, researchers and lecturers of the faculty. Since it was introduced in 2013, ‘the blue book' has been a staple of the Faculty’s identity, known and used on design programmes in the Netherlands as well as abroad - and it has even been translated into Chinese and Japanese. 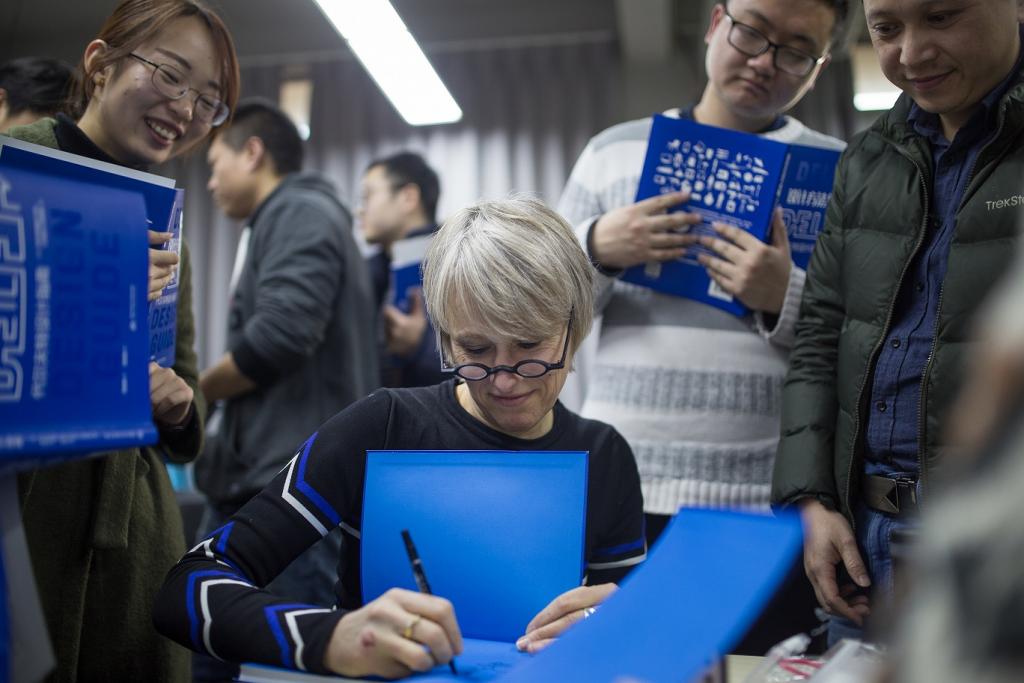 The book gives an overview of perspectives on design, such as Design for Emotion and Brand Driven Design, models, such as the Basic Cycle of Design and Innovation models, and about 60 design methods, such as Contextmapping and the Ecodesign strategy wheel. Some methods are unique to Delft, while others are more widely known.

Clap state - more power over longer distances
In collaboration with the Dutch skating brand Raps, Maurits Homan came up with a modification for the clap skate (2001). “That was big news at the time", remembers Homan. "Skaters could go even faster on these skates and set new records. In addition, the design was also conceptually interesting because it looked as though all the parts had just been patched together haphazardly.” 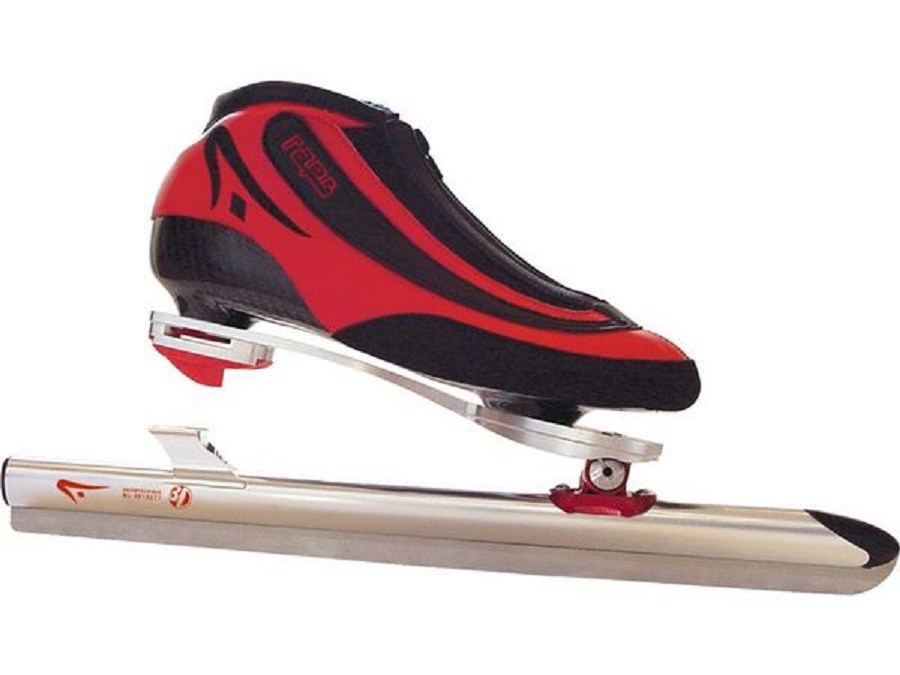 The idea behind the design was to make the skating stroke longer, so that skaters could generate more power over longer distances. "By tilting the axis of the clap skate over two surfaces, the iron, together with an angular rotation of the heel, tilted inwards. This movement matched the alignment of the upper tarsal joint more closely.”

After a lot of research and a number of prototypes, a final design was developed - and has since helped skaters like Jan-Maarten Heideman and Peter de Boer win many races.

Senz paraplu - an umbrella for gale-force winds
Gerwin Hoogendoorn's graduation project (2005) arose from his own frustration with traditional umbrellas (he once threw away three in one week) and formed the basis for the development of Senz. 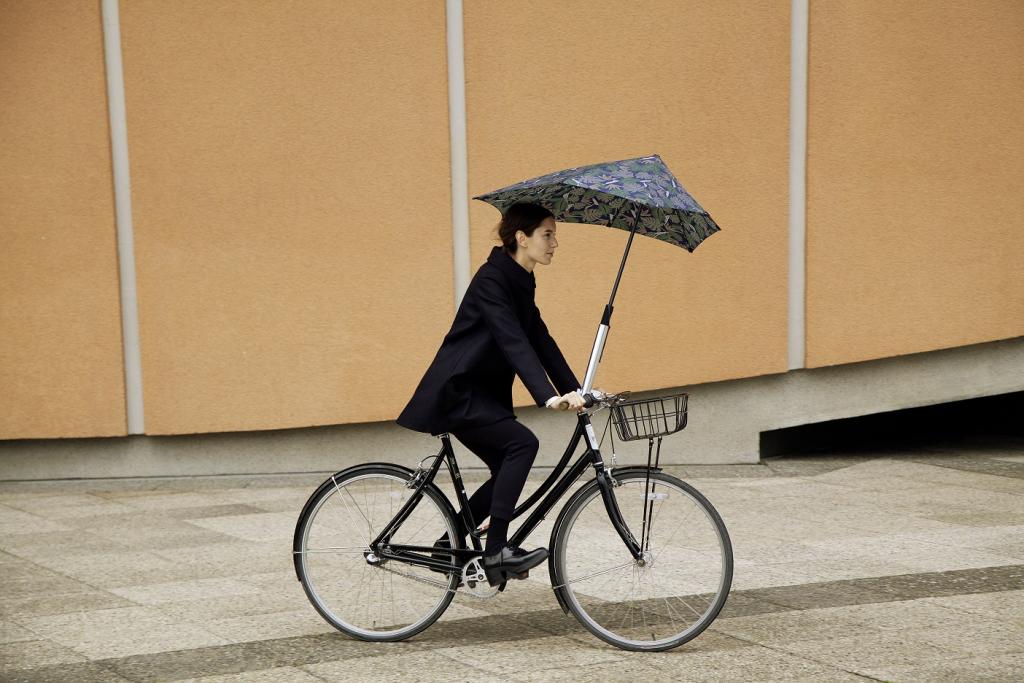 The project was by no means a smooth ride and Hoogendoorn found himself well outside his comfort zone. To understand the problem with traditional umbrellas, he investigated broken umbrellas, "but I had to dig them out of rubbish bins first. I got quite a few funny looks doing that," he recalls. Under the supervision of Bruno Ninaber van Eyben, he pushed himself to the limit to create a product that solved all the problems of a traditional umbrella in one fell swoop.

Hoogendoorn, now only involved with Senz as a shareholder, can still see that his design is in a different league when it comes to quality. "You can even rely on this umbrella in gale-force winds".

Nightbalance - therapy for sleep apnoea
In 2008, Eline Vrijland-van Beest and Thijs van Oorschot launched a new therapy for people with sleep apnoea: they stop breathing for at least ten seconds while sleeping. They developed a sensor that vibrates gently when people roll over and sleep on their backs, thereby helping them avoid unhealthy sleeping positions. 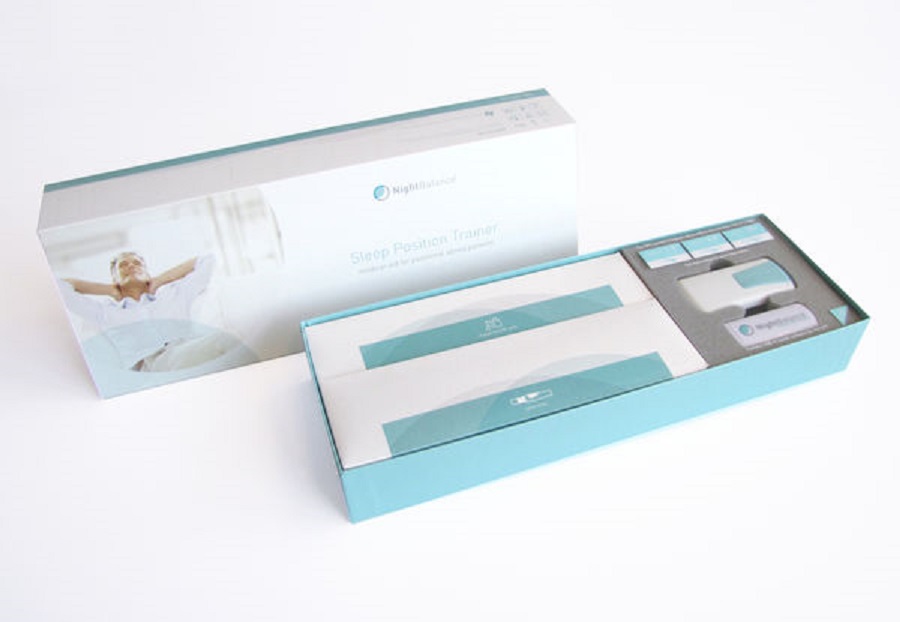 It was originally Eline's father who came up with the idea for a device for this position therapy. She turned it into her graduation project and then founded the tech start-up NightBalance, where she did further research with Thijs van Oorschot. The development of the sensor was a complex process. "You want to test with real patients and you can only do that with strictly regulated clinical research", says Vrijland-van Beest.

It took him a whole decade to test and determine that the sensor really worked. NightBalance now has fifteen patents and the device is covered by the basic health insurance package. "Position therapy can help more than 25 million people worldwide with their sleep apnoea," says Vrijland-van Beest. “That’s quite an impact.”

Ambulance drone - delivering a defibrilator fast
In 2014, Alec Momont’s graduation project was an initial prototype of the ambulance drone, an unmanned and autonomously navigating mini aircraft that can deliver a defibrillator at lightning speed.

When the emergency services receive a cardiac arrest call, this drone flies to the patient‘s location. The drone homes in on their position using the caller’s mobile phone signal and finds its way there using GPS. It can fly at around 100 km/h, weighs 4 kg and can carry another 4 kg. Using a livestream, the drone provides direct feedback and gives instructions to the people on site.

According to Momont, it is essential that the right medical care is provided within the first few minutes of a cardiac arrest. If we can get to an emergency scene faster we can save many lives and facilitate the recovery of many patients. A network of such drones could significantly increase the chance of survival following a cardiac arrest: from 8% to 80%!

Nudging Toolkit - influencing unconscious behaviour
It is becoming increasingly difficult for organisations to understand and change customer behaviour. For example, how can banks encourage people to save up money for their pension and how can care organisations motivate people to adopt a healthier lifestyle? It was while studying strategic product design that Anne van Lieren became interested in human behaviour. 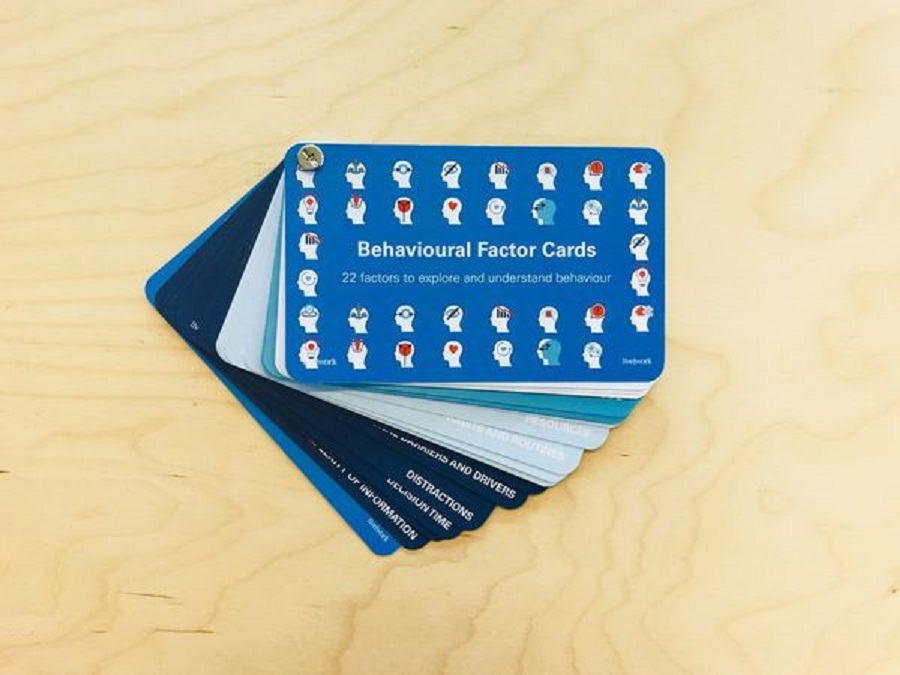 For her graduation project (2018), Van Lieren studied more than one hundred nudging techniques(consciously influencing unconscious behaviour) and developed a new approach and accompanying toolkit for designers who are interested in behavioural change. "It is becoming increasingly difficult for people to make conscious decisions - we simply don't have enough brain capacity and energy to think about everything consciously. Designers can use this toolkit to snap people out of this autopilot at the right moment and encourage them to think about an important issue," she says.