3mE organises competition for boomerang carts

Each of the 127 carts that appeared at the start was built with care. (Photo: Justyna Botor)

First-year mechanical engineering students tested their home-made RET cars on Monday. Their carts had to drive off, brake and return in reverse. Who made the best design?

Some 800 students, divided into 127 groups, appeared at the starting line of the two race tracks in the Faculty of Mechanical Engineering, Maritime Engineering and Technical Materials Engineering (3mE) on Monday. In their hands, the design they had been working on for the past eight weeks: a cart that drives itself, brakes, and, like a boomerang, comes back towards the starting line. Whoever covers the longest distance and returns closest to the starting line wins.

The trolleys must meet a number of criteria. The distance between the front and rear axles must be up to 40 centimetres, and the mass of the carts two kilograms or less. A spring has to be used for acceleration, for braking and reversing, a spring, a weight or a flywheel. "Fewer choices lead to better results," is teacher Menno Broers‘ experience. "As they don’t waste time weighing up alternatives, they can quickly concentrate on their design and on building it."

Meanwhile groups WB024 stands at the starting line with their cart. It has a symmetrical construction with two torsion springs, levers, and strings to the front and rear axles. Before the start, one of the students pulls the trolley backwards again and again, thus applying tension to the rear torsion spring. The string pulls the lever further and further down.

As soon as she lets go, the spring drives the rear axle via the lever and the string. The lever rises and the cart gains speed. A few metres further, the front lever turns down as a string from the front axle starts pulling it in. That slows down the cart and then sets it off on the return journey. WB024’s cart covered 4.58 metres, both forwards and backwards. 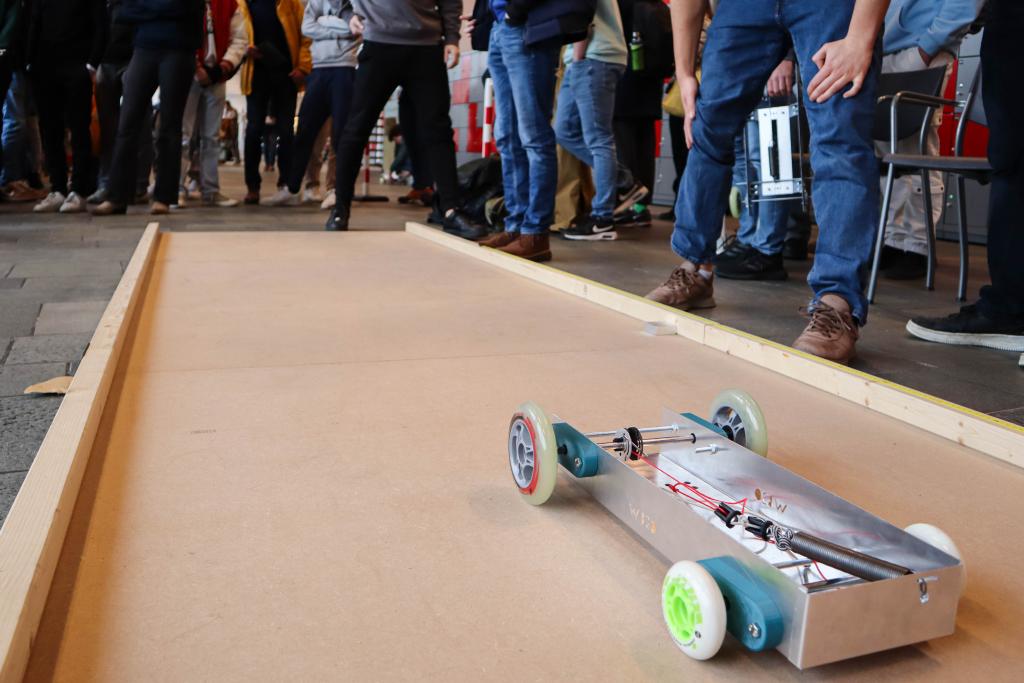 “If only we had this 30 years ago,” sighs Broers. In his time, the emphasis was still on theory and being able to do the assignments. “The RET-Car project (Regenerative Braking and Reversing, in Dutch) gives students a feel for materials, connections and constructions. The theory will then fall into place better later.”

“And it is a good opportunity to apply the parallel subject of strength theory,” adds Regine Vroom. She is the Coordinator of the design course. Referring to the final result, she says that “Several types of concepts had the potential to achieve the maximum score. The difference was made by neat construction, making the performance more predictable and allowing the car to be set up very precisely.”

Who were in the teams?

Education Minister Dijkgraaf plans to use a combination of laws and agreements to manage the influx of foreign students. He also wants more control himself.
Education

A new law is being drafted to allow popular degree programmes to reintroduce a lottery system in addition to their existing selection procedures.
Education